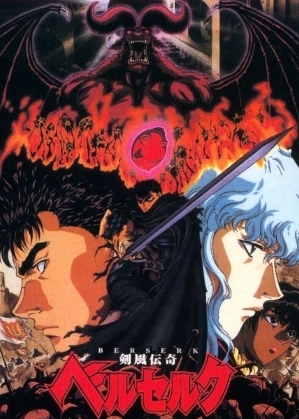 ♪ Hai Yai Forces! ♪Characters Bottom row, left to right; Guts, Black Swordsman Guts, Griffith, Casca; Above, Nosferatu Zodd.
"In this world, is the destiny of mankind controlled by some transcendental entity or law? Is it like the hand of God hovering above? At least it is true that man has no control, even over his own will."
— Opening Narration
Advertisement:

Berserk, also known as Sword Wind Chronicle Berserk (剣風伝奇ベルセルク, Kenpuu Denki Beruseruku), is a 25 episode anime adaptation of the seminal Dark Fantasy manga Berserk by Kentaro Miura. Directed by Naohito Takahashi, with series composition by Yasuhiro Imagawa and animation production by Oriental Light and Magic, the series aired from October 7, 1997 to March 31, 1998 and opened the door for all the other Berserk adaptations that followed.

The story opens on a town crushed under the heel of the monstrous Baron of Koka Castle, who extracts tribute in gold and prisoners with the help of his thugs, and dines on human flesh. Into this picture strides Guts, a ruthless black-clad wandering swordsman with a metal hand and a weapon too big to be called a sword. After Guts defeats the Baron in fiery combat, the story flashes back to the manga's Golden Age Arc to show how Guts came to be branded as a sacrifice for demons by the man he once fought alongside as a brother.

This anime produced some Hilarious Outtakes from the English dub which are detailed on the Berserk Funny page, and it also inspired the gleeful parody Berserk Abridged.

When I look out there, it's like...A bonfire of tropes:

John Avner (As The Narrator): In this world, for—
Director: Uh uh, that's all John. We don't need that stuff anymore, the show's over.
John: Who are you!? I am the Hand of God hovering abo—
Director: No, no, John, John, thanks, that'll be all.
John: No! You have no control! Not even your own will!
Director: Ohwoahwoahwoahwoah! No, uh, it's the end of the series, that's—that's the last episode.
John: But this is...my will...
Director: John, would you please get out of the booth?
John: Who is John, I am the Hand of God, hovering—hey-get your hands off—
Feedback

The Black Swordsman gives the serpentine demon, who just led a raid on a village, the cruel and painful end he deserved.

The Black Swordsman gives the serpentine demon, who just led a raid on a village, the cruel and painful end he deserved.