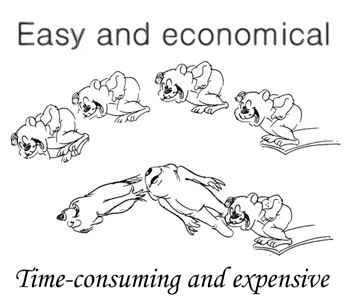 "As a cartoon blues man might say, if it wasn't for limited animation, we wouldn't have no animation at all."
— Fred Seibert, in defense of

The practice of using mix-and-match parts in animation, rather than having a completely new drawing for every new frame. This trope also covers using deliberately abstract character designs and backgrounds that will not obviously clash with the low production values.

The technique was popular in the early days of animation and can be seen in J.R Bray's first animations and early comedy shorts like the Colonel Heeza Liar series, since it had very stiff animation and they're moving comic strips.

The more detailed and realistic animation of Disney and Fleischer Studios would eventually take over and dominate the field, until the 1940s and 1950s, when two things happened: Chuck Jones's The Dover Boys short over at Warner Bros. and John Hubley's... everything at United Productions of America.

John Hubley from UPA was a well-known advocate of limited animation as art. He encouraged animators to experiment with primitivism and expressionism in the 1950s and 1960s, leading to the development of some pretty trippy stylized backdrops and character models that would became a major influence in the following years, with most Western television animation owing something to UPA shorts like Gerald McBoing-Boing to some degree.

Speaking of television, its place in the widespread reemergence of limited animation definitely cannot be forgotten. While Chuck Jones and John Hubley were playing with limited animation from an artistic standpoint, studios like Hanna-Barbera and Filmation quickly recognized it as a way to save time and money. Television work had much smaller budgets and required quicker turn-around times for a finished product than theater, and limited animation provided a much-needed middle ground between expensive "full" animation and the motion comic style of previous television works like Crusader Rabbit. This didn't stop Jones, who believed that the best animation can be watched without a soundtrack, from being extremely critical of Hanna-Barbera's cut-rate animation style though, dubbing even this more comparatively lively approach "illustration radio."

The radio comparison isn't entirely inaccurate, however: limited animation leans heavily on its writing and voice acting due to the rather limited visuals. While most works live and die by the strength of their story, limited animation especially forces the creators to write well and for the voice talent to have excellent delivery, as the spectacle of fun cartoony or flashy action-packed animation will not save them... because there isn't any. Unless you're Studio TRIGGER, anyway. You see, Japanese anime also uses limited animation, but in a different way than the West. Alongside reusing drawings, things like less-frequent eye blinks keep down costs even more, while speed lines with abstract backgrounds, rendered long shots of incredibly detailed backgrounds, and a long list of visual tropes keeps the audience more visually engaged in a manner that is often lacking in Western productions.

Finally, in a certain sense, all animation is limited in one particular way: with very few exceptions, it's foreground animation over static backgrounds. Or, for something like a train passing behind some buildings or trees, background animation over static foreground. In very early animation (e.g., "Gertie the Dinosaur"), the environment was redrawn for each frame. In very short order, it became clear that drawing your characters separately and laying those drawings over that environment/location (that might not change for minutes at a time) was the best way to do things. Today, this technique is so universal it scarcely bears mentioning. Scenes where the background is not static are incredibly rare, very expensive, and can look pretty odd. CG animation operates under different rules, but the basic principle is still the same: focus the bulk of your time and processing power on the characters rather than any environmental elements they won't interact with.note Interactive environment is the reason for the Conspicuously Light Patch in traditional cel animation, for the record.

Though, because there is a difference between Limited Animation and fully produced animation, it can become used for an Art Shift as contrast for the main work, which is especially popular for exposition or flashback narratives.

As technology has progressed, the ability to produce animated storyboards became more common with the advent of software like Flash and Toon Boom, which may be released to the public as promotional material. Its primary use is being able to use crude CG or hand drawn images on top of a similarly crude background for the more detailed animation to use as a guideline for final editing and vocal timing. The same process has been used for "animated comics" where genuinely hand drawn comics are animated via voice over, use of The Ken Burns Effect or simplistic effects plug-ins like smoke and fire. Video Games also use it by necessity. Nowadays on TV it is a Discredited Trope because TV animation has become fuller and fluid since the 1970's and the 1980's and onwards, but this method can be used for Web animations.

One extreme form is Synchro-Vox, which involves live-action lips mixed onto unmoving cel drawings. Compare Lazy Artist (which is sometimes associated with this trope), Stylistic Suck (when this trope is invoked as an intentional Shout-Out to low-budget cartoons). Contrast Disneyesque.

Since this is such a widespread trope, examples should be particularly notable, or play with this.

Example of:
Misspelling Out Loud