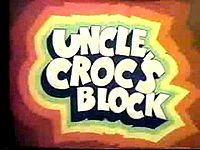 "Who's our Star Time guest for today, Uncle Croc?"

Charles Nelson Reilly, already a fixture on the CBS version of Match Game, was the crocodile-suited star of this three-month Filmation series on ABC, a parody of the Animated Anthology programs with live presenters that were in nearly every major TV market in the 1950s and 1960s. Reilly's co-stars were Alfie Wise as Uncle Croc's sidekick, Rabbit Ears, and Jonathan Harris as the director, Basil Bitterbottom. Due to competition with Shazam! (1974), also a Filmation production, the show was such a flop that ABC told Filmation to never sell them another show. Ironically, after ABC canceled Uncle Croc's Block, they replaced it with reruns of Filmation's 1970 show The Groovie Goolies.

The three animated segments were:

The aforementioned animated segments were later integrated into the Groovie Goolies and Friends syndicated omnibus.

Live-action segments included guests such as Steve Exhaustion, the $6.95 Man.