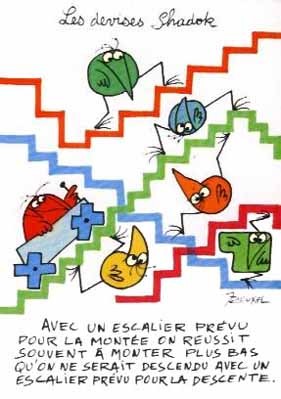 Les Shadoks is a French animated TV show created in 1968 by Jacques Rouxel, which ran for four seasons, the second and third in 1969 and 1972, and the last one in 2000. The show has no dialogue except for the narrator, French actor Claude Piéplu.

You guess what's next: the story is about the Shadoks' and the Gibis' rivalry for Earth, a planet "that seemed to work better". The Shadoks are stupid and mean-spirited birds who can't fly (their wings are too small) and the Gibis are unidentified intelligent animals with a little hat to say "hello". The show is about pumping, space conquest rivalry, a mean insect named Gégène and criticism of the institutions: government, science, religion... This last point is particularly significant as the show was broadcast just a few weeks before the events of May, 1968 in France

The other important aspect is that the show is mostly hilarious nonsense. Expect many crazy shout-outs that come out of nowhere, barely any consistency and plenty of fourth wall breaking.

Les Shadoks has become a rare example of French cult pop culture, though it's mostly unknown outside of France.

The second and third seasons had barely any plots (or more precisely many subplots with nothing really linking them together), but are popularly believed to be the funniest series of the saga, due to being even crazier and more creative than usual.