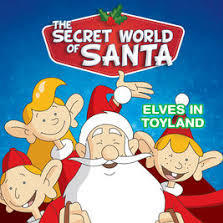 A jolly butterball and his three helpers.
Advertisement:

It chronicles the adventures of Santa Claus and his three elves, Thoren, Jordi and Guilfi, as well as the polar bear Balbo, as they make preparations for Christmas and help children in need. Their efforts are frequently stymied by Gruzzlebeard and his henchman Dudley, who try to sabotage Santa and ruin Christmas.

Of course, this is a Christmas show about Santa, so the bad guys never succeed for long: they usually end the episode caught up in whatever trap they've tried to set for our heroes.

Although only 26 episodes were produced, the series has had international distribution, most notably in Canada on Teletoon, which has made airing the show a Christmas tradition.

The Secret World of Santa Claus contains examples of: