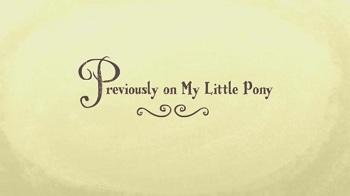 Note: this usually crops up right after the first of a two-parter.
Jaller: [dramatic voiceover] Previously on Lincoln Heights...
Axonn: Look, the thing was like three minutes long. Just watch it.
— The Chronicles of Jaller
Advertisement:

Previously, on This Very Wiki...

A clip montage at the beginning of an episode with a voiceover, or a slide, saying "Previously on (show name)", or a variation "Last time on (show name)", that serves to get the viewer up to speed on the parts of the arc relevant to the episode in question. The majority of Arc-based series use these. Outside of those, usually only used if it's the beginning of a continuing part of a multi-parter. It's also known as "The Previously", or just the recap.

On shows that make regular use of them, it's common for responsibility for the voiceover to rotate through the main cast members, generally without much regard to the content of the episode.

The viewer may sometimes wonder whether the writers of a series threw in a line of dialogue or a scene that succinctly sums up what's going on with an eye towards (or for the sole purpose of) including it in the next episode's "Previously...." Furthermore, the Previously clip montage occasionally includes footage that didn't make it into the final cut of the earlier episode (thus lying to the viewer when it claims that it was previously featured on the show).

This device can tip off the audience to important elements of the coming episode. In a competitive reality show, for example, a character featured heavily in Previously On may be getting the boot. In a drama or other arc-heavy series, if you see something in Previously On that didn't seem important previously, it will become important. See Chekhov's Gun.

By contrast, some anime series will begin an episode by recapping scenes from the previous episode, but these may be intercut with new scenes.

When used in video games, it gives a clue to the answer to "Now, Where Was I Going Again?"

Many, many examples can be seen here

Contrast with On the Next. Accompanied by a To Be Continued on the previous episode. Compare Title Montage, for open credits made up of scenes from early or previous episodes.

Aversions (episodes expected to follow this trope but don't)

Alternative Title(s): The Previously, The Story So Far