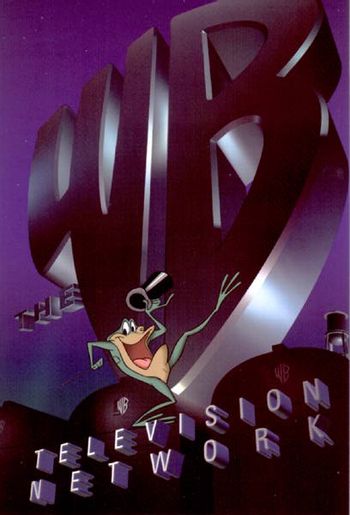 Dubba-Dubba WB!
OK, everybody, it's time for a song from the little network with a really big sign!
—Michigan J. Frog at the beginning of a music video promoting the network
Advertisement:

The WB was a joint venture between Warner Bros.note From 2001-2003, it was technically part of Time Warner sister company Turner Broadcasting in order for network CEO Jamie Kellner to also oversee TBS, TNT and Cartoon Network and Tribune Company with the former company calling the shots. As a reaction to the success of the fledgling Fox network, Warners launched their own network in 1995, with Tribune's then-independents (WPIX in New York, KTLA in Los Angeles, WGN in Chicago, KWGN in Denver, etc.) serving as the network's nucleus. Unlike UPN, it also had a major boost with WGN's national superstation feed on cable (now WGN America, which eventually cut all ties to WGN-TV in 2014) carrying it for its first four years until it could get more affiliates.

While it was able to gain some available independent stations and even steal some affiliates from UPN after its launch, to clear up the bugs with carriage in smaller markets (particularly those in the bottom 100), The WB launched a national feed called The WeB (subsequently renamed The WB 100+ Station Group) in September 1998; consisting entirely of cable-exclusive affiliates (although it managed to gain some over-the-air stations as well in the network's final years), it was an automated feed which mixed syndicated shows with network programming, with programming, and local and national ads sent to and from a server network based in Los Angeles and specialized computer systems housed at the offices of the affiliate operator.

Much like Fox before it and UPN after it, the network had no news division, although many of the charter affiliates owned by Tribune did have their own operations; indeed, WPIX had shut down their own attempt at a national newscast for independent stations, INN

(Independent Network News, then INN: The Independent News, then finally USA Tonight) a few years before the WB was announced (all of Tribune's owned stations took the program).

The network is remembered differently depending on how old you are. A lot of African-American teenagers and young adults that were around during the network's launch will remember the assortment of sitcoms and dom coms the network had to offer such as The Parent 'Hood, The Wayans Bros. and Sister, Sister, the last of which moved from ABC. Kids in the mid-'90s fondly remember The WB as the host network for Animaniacs after it was acquired from Fox, along with other Steven Spielberg-helmed Saturday morning cartoons such as Freakazoid! and the Animaniacs spin-off Pinky and the Brain. Mexican kids in the mid-'90s might remember it for being the first channel to air Beakman's World, which was one of the earliest Science Shows to air in the country. Kids in the late '90s and early 2000s remember it for pretty much dedicating Saturday mornings to 4Kids with Pokemon and Yu-Gi-Oh!. Teenagers during the late '90s or early 2000s will remember it for giving the world such teen dramas as 7th Heaven, Dawson's Creek, and Everwood — shows that the network is, without a doubt, most famous for. Still others (teenagers and genre fans alike) remember the network for Buffy the Vampire Slayer and Roswell until those two series were picked up — perhaps ironically, in hindsight — by UPN (The WB still held onto Angel at least).

And of course, many still remember it for turning the one-toon wonder Michigan J. Frog into a household name while at the same time reducing him into a cheap corporate shill for the network (to the point where some TV writers and announcers referred to The WB as "The Frog"). The frog quietly exited the stage from advertisements and promotions during the last two years of the network's life (though his image was among the last transmitted by the network; the last thing shown before the network was officially shut down were the end credits of the pilot episode of Dawson's Creek).

This network was rolled up with UPN to form a new network called The CW in 2006, with The WB's final primetime block, A Night Of Farewells And Favorites, airing on September 17, 2006. However, its successor used several elements carried over from The WB: including its 30-hour weekly programming schedulenote 13 hours in primetime (two hours on Monday through Fridays, and five on Sundays, the latter night was turned over to The CW's affiliates in 2009), two hours in daytime (one of which was turned over to CW affiliates in 2010) as well as the Kids' WB block on Saturday mornings (which it replaced with The CW4Kids in 2008) as well as the small-market network feed (which became The CW Plus, and began mixing in affiliations with digital subchannel and conventional primary affiliations).

At one point, The WB was reborn as an online network, airing both older shows (including most of their old teen dramas) and original programming. In late 2013, this site was discontinued in favor of The CW's new online television platform, CW Seed, and the site redirected to a promotional news site called Warner Bros. Television Media to Go, thus putting the final nail in the coffin for the history of The WB. The revived Kids' WB website struggled on for two more years before getting the ax as well.

Shows featured on The WB included:

This has been a special report from the Weird Butt Network.
Feedback