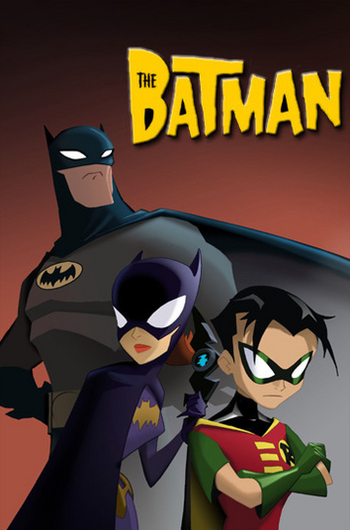 An Animated Adaptation of Batman that began airing on Kids' WB! in 2004 and ended its run in 2008, The Batman is the story of a young Bruce Wayne solving crimes and beating up villains. It was the first Batman cartoon made outside the DCAU since the latter debuted with Batman: The Animated Series in 1992. It was also the first Batman series to feature certain obscure comic villains such as Cluemaster.

The series also did a mix up of traditional DC Comics lore, primarily that Batgirl shows up as Batman's partner before Robin. Later on, it showed Batman as being immediately on board with the Justice League and convincing Superman it was a good idea, as normally Superman and Martian Manhunter have some difficulty getting Batman to commit to the League.

Eventually, 4Kids Entertainment's takeover of Kids' WB! led to the show getting cancelled among other Kids' WB programs. However, the series ended in a more ceremonious tone by ending with a 40-minute TV movie, a treatment most of the other canned Kids' WB programs did not receive. The series was also allowed to run on Kids' WB!'s successor, TheCW4Kids, for a few more months before quietly disappearing.

The show was produced by Duane Capizzi and characters were designed by Jeff Matsuda, most famous for their work on Jackie Chan Adventures and there is plenty of resemblance between the two shows, mostly the art style and the frantic action scenes. In the fourth season Alan Burnett of B:TAS was brought in as showrunner, resulting in a dramatic shift into exploring the greater DCU universe outside of specifically Batman and his Rogues Gallery. Also notable in regards to its movie, The Batman vs. Dracula. It spun a comic series, "The Batman Strikes," which lasted for 50 issues.

Not to be confused with the Columbia Pictures 1943 serial or the 2022 film.

Also has a recap page.