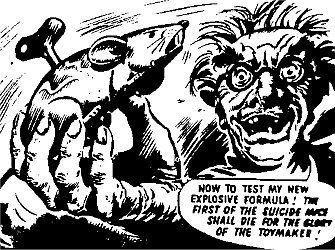 Look at all this stuff! Creepy dolls, demonic dummies, wicked marionettes... who the hell makes all this stuff, and why hasn't he had his license revoked yet?

The Wicked Toymaker is someone who makes broken toys, and not in the "need new parts" sense. A subversion of the fairy tale trope of the beloved innocent toymaker who cares for children everywhere, the toymaker will often have a love for children that, while not often going into Squick territory, is nonetheless twisted. Perhaps they have a child's whimsy... and impertinence. Maybe they value kids so much, they want them to be safe and happy... especially from meddling parents. Or maybe it's the toys themselves that matter, and any kid who's dumb enough to break them deserves his wrath.

Alternatively, they could not like kids at all, and seeks to harm them through intentionally deadly "toys". This kind of villain will make death machines disguised as toys with the intent of unleashing them on unsuspecting kids.

If this character sells their creations to other villains it's also an example of Welcome to Evil Mart.

May also be a Marionette Master.

Compare Drone Deployer, Robot Master and Evil Puppeteer, and it is probable for a Wicked Toymaker to be a one of these as well. May also act similar to a Depraved Kids' Show Host or a Psychopathic Manchild. On a similar note, it is also not uncommon for a Wicked Toymaker to have gimmicks and Mooks themed around the Villainous Harlequin and Monster Clown tropes, or for the Toymaker to act like, or just flat out be a clown, which makes sense due to how many clown toys there are and how heavily clowns are associated with toys and childish whimsy. The most "realistic" and least "whimsical" versions of this character usually make him/her a Mad Bomber character, as hiding bombs in toys seems like the most mundane way to weaponize toys (it is not uncommon for Mad Bomber to also be a previously mentioned Drone Deployer, often using remote-controlled cars and planes). This character may also invoke a stereotypical Wicked Witch at times, particularly in more fantasy-based stories.