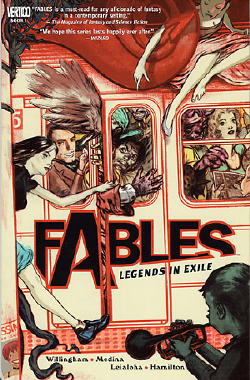 Magical beings of legend... hiding in plain sight.
Bigby Wolf: You're lying now, because you always lie.
Jack Horner: Not this time!
Snow White: Jack, did you ever hear about the boy who cried wolf?
Jack Horner: Sure, he lives up on the seventh floor. So what?
Snow White: Never mind.
Advertisement:

In the middle of New York City, characters from the old stories and fairy tales live among us in exile. Bill Willingham has taken characters we've grown up with, including Snow White, Bigby (a.k.a the Big Bad) Wolf, Jack Horner, Cinderella, Pinocchio, Boy Blue, the Frog Prince and many more, and spins them into a realistic, modern day setting.

The characters we, the people of the Mundane World, thought were fictional have come to the real world to escape The Emperor/The Adversary, a despotic conqueror of tremendous power who rules over The Empire. Eventually, a number of these characters, heroes and villains alike, decide to put aside their differences and stick together in their own community. Old crimes are forgiven by signing a compact which makes them a citizen of this community, and also forbids them from revealing their true nature to the "mundies". Non-human characters who can't afford a spell to make them look human are consigned to a secluded "farm" in Upstate New York. However, those old crimes are rarely, if ever, forgotten; a major early plot point is that Bigby Wolf is banned from said "farm" for all the atrocities he committed before he reformed.

The series has encompassed mysteries, adventure, romance, conspiracies, magic, culture clashes, and fly eating, and has to date won 14 Eisner Awards. As of 2008, it's the most popular Vertigo Comics title. As of 2010 Fables was the second longest running Vertigo title after Hellblazer. The series initially came to an end with its 150th issue in 2015; however on June 10, 2021, it was announced to resume in 2022 under the DC Black Label imprint with its 151st issue.

Not to be confused with Xbox Game Studios' Fable video game series.

Baba Yaga: I've never heard of such a creature. What are his powers?
Magic Mirror: He reads. He reads everything.

D-F
G-I
J-L
M-O
P-S
T-Y
Tommy Sharp who suspects that the citizens of Fabletown are vampires. He decides to go right up to them and say that he thinks they are immortal vampires. It gets even better when we learn WHY he revealed his "knowledge" to them: He thought they deserved a chance to tell their side of the story before he published it.