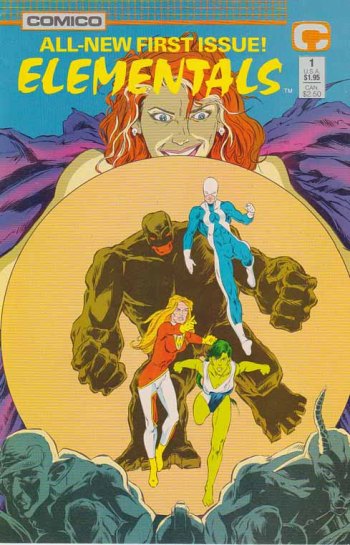 Elementals was a dark superhero series published by Comico in three volumes in the 1980s and 1990s. It was initially written and illustrated by Bill Willingham, later of Fables fame, but as the book went on, he eventually stepped down to simply writing it before leaving the book altogether halfway through volume 2. It also features early work by Jill Thompson (Beasts of Burden, The Sandman) and Tony Daniel.

The first few issues of the series featured typical superhero battles, albeit more violent and pseudo-realistic than many contemporary books were, but the series grew more psychological as it progressed, delving into topics such as death, fame and alienation. Elementals was an interesting example of mature comics before DKR or Watchmen, and remains a cult favorite among many who have read it.

Willingham sold the rights to Elementals to Comico's publisher Andrew Rev in the 1990s in order to help restart the publisher's comics business, but it never got off the ground and quickly folded. This appeared to be the end of the road for Elementals for over 20 years, until someone at Dynamite quietly applied for a copyright to the series in 2017