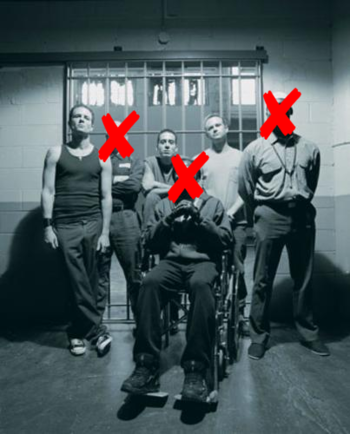 Most of the time when you finally grasp who the main characters of the story are, you can expect that these characters will survive through the end of the story (or at least until the last episode). Like, c'mon, there's no way the writers would actually have the young and innocent Tagalong Kid actually die without being saved at the last second, let the loyal team dog be mauled to death by wolves, or allow a sweet ol' granny to be run over by a speeding truck. Right?

This is very common in Darker and Edgier works. When the writers want to impress you with their ruthlessness, they may trumpet that Tonight, Someone Dies, then kill off a random second-stringer that nobody cares about much. They might even kill off a major character because their actor was leaving anyway, or because they needed a good cliffhanger to convince people to watch the next season. That is also not this trope (although it's merely pretending to be).

Anyone Can Die is where the Sorting Algorithm of Mortality is thrown out the window from eight stories high, then further tenderized with a lead pipe; no one is exempt from being killed, including pets, children, the elderly, even the main characters (maybe even the hero!) The Sacrificial Lamb is often used to establish the writer's willingness to kill off important characters early on. To really be the Anyone Can Die trope, the work must include multiple deaths of named characters, happening at different points in the story. Bonus points if the death is unnecessary and devoid of Heroic Sacrifice.

This trope is very helpful in keeping fans from being Spoiled by the Format. War shows like Mobile Suit Gundam benefit from having a larger cast since there are so many people to kill off. The frequent deaths within a wide cast make the storyline unpredictable, forcing you to wonder who'll be left standing once the dust settles.

When used poorly or too frequently, this trope can cause Too Bleak, Stopped Caring, possibly with audiences uttering the Eight Deadly Words, as the audience won't see any point in getting attached to characters that they expect to die sooner or later.

Note that the character needs to be Killed Off for Real for the trope to have the desired effect; it does not work if the writers cheat and bring back the guy later (see Not Quite Dead, Disney Death, Negative Continuity, and Climactic Battle Resurrection). As such Super Hero Comic Books as a medium have gained a reputation of "Anyone Can Die... until someone wants to use the character in a later story."

See also Kill 'Em All, when everyone will die. Opposite of Nobody Can Die and Plot Armor, where not even situations that should kill people manage to. See also Dwindling Party, where the deaths are evenly spaced rather than near the end. Easier to do in works with large casts. Can be expected in a Tragedy. Red Shirt is (usually) when the deaths are reserved for nameless extras. This trope tries to upgrade them to Mauve Shirt first.

This is easily defined as definite Truth in Television, because all living organisms are mortal and are bound to, by statistics at least, eventually die for any number of reasons, with no fiction writers to determine how it happens, so No Real Life Examples, Please!