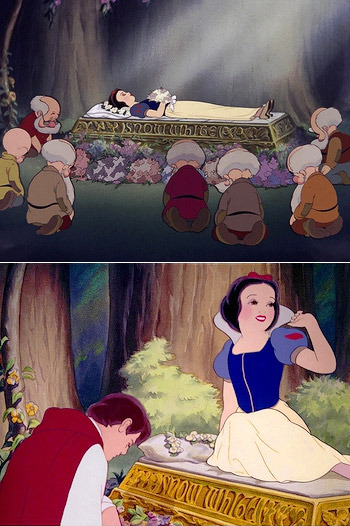 Silly witch! Death is for villains!
"Yeah, boo hiss. I know, look, I hate it too. In movies, where the studio gets all paranoid about a downer ending so the guy shows up, he's magically alive on crutches? I hate that. I mean, shit, why not bring them all back?"
— Harry, Kiss Kiss Bang Bang

Beloved major character is seemingly killed at the climax of the movie/episode, hearts are wrenched, four-year-olds are traumatized, grown men are reduced to tears, and then — oh look, the character is Not Quite Dead after all. "I thought you were dead!", they recite before walking off into the sunset.

A variant is the Robot Disney Death where a Robot Buddy is seemingly destroyed in a Heroic Sacrifice. While at least one character mourns, the robot reappears fully repaired after an extensive period in Mr. Fixit's maintenance shop good as new and touched by all the concern.

Animated films seem destined to have these, considering the target audience is primarily young kids, and nobody wants to give a Downer Ending to them. Writers who are considering implementing it need to be extremely careful, as it can very easily come across as a tacky and lazy way to add some cheap and predictable drama to the ending. Over the years it has been done to — um — death, and audiences expect it. You run the risk of making your viewers remember they're watching television, even if it does shut up the Media Watchdogs.

Named after its frequent use in the Disney Animated Canon, though even Disney likes to kill 'em off for real now and then.

Subtrope of Reports of My Death Were Greatly Exaggerated and First Law of Resurrection. Compare Sorting Algorithm of Deadness (how likely this is to happen), Our Hero Is Dead (when this is used as a Cliffhanger), Unexplained Recovery, Shock-and-Switch Ending, World-Healing Wave (done on a massive scale), Only Mostly Dead, Plot Armor (you know he's going to live because he's the main character). Contrast Killed Off for Real. May involve Not Now, We're Too Busy Crying over You. A Premature Eulogy is likely to occur somewhere between the death and the return.

Since this trope requires both a death and an ending, be wary of large, unmarked spoilers.

Alternative Title(s): I Thought You Were Dead