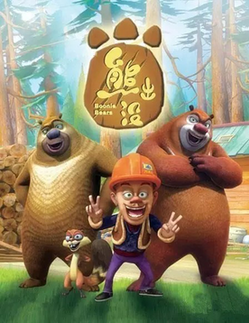 The main characters of the shownote From left to right: Bramble, Warren, Logger Vick, Briar

Boonie Bears is a Chinese All-CGI Cartoon starring two bears, Briar and Bramble, who continuously try to stop Logger Vick from cutting down trees in their forest. Vick constantly tries to carry out his job as a woodcutter, only to be hilariously outwitted by the clever bears.

This animated show, beginning in 2012, has become the most popular cartoon in China since Pleasant Goat and Big Big Wolf. It has been dubbed in several other languages, including English and spawned tons of merchandise. There are currently four film adaptions at this moment: Boonie Bears: To the Rescue, Boonie Bears: Mystical Winter, Boonie Bears III, and Boonie Bears: Entangled Worlds. A Spin-Off Babies show, Boonie Cubs, has also been produced and aired.

The film adaptions contain examples of: