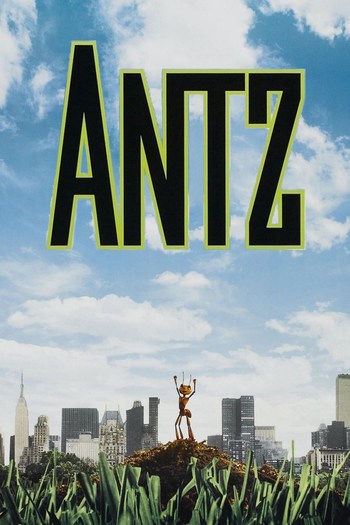 Every ant has his day.
Z: It's this whole gung-ho super-organism thing that, that, that I - you know, I can't get, I try but I- I don't get it. I mean, you know I'm- What is it? I'm supposed to do everything for the colony, and, and what about my needs? What about me? I mean, I gotta believe there's someplace out there that's better than this, otherwise, I will just curl up in a larval position and weep! The whole system makes me feel... insignificant!
Therapist: Excellent! You've made a real breakthrough!
Z: I have?
Therapist: Yes, Z! You are insignificant.
Z: I am?
Advertisement:

Antz is a computer-animated film created by DreamWorks in 1998, the first feature film by DreamWorks Animation and the third feature-length CGI movie ever released (after Toy Story and the Brazilian movie Cassiopéia

). Most of the time, if someone mentions it, they're either comparing it or confusing it with Pixar's A Bug's Life, and fair enough, both are computer-animated films about insects released in 1998. However, Antz is far Darker and Edgier than A Bug's Life, as it was geared more towards adults and teenagers—who all brought their children and younger siblings to see it. Nevertheless, it was successful, and in fact was one of the first non-Disney animated films ever to gross over $100 million worldwide.

The protagonist is a worker ant named Z 4195—simply known as "Z" (voiced by Woody Allen). He is somewhat neurotic, pessimistic and maladjusted to life in an ant colony, where each individual is treated as an insignificant part of a greater society. One day, he hears a drunk veteran soldier ant go on about some place called Insectopia, where food is plentiful, there are no rules, and everyone lives in peace. Z and his soldier friend Weaver (Sylvester Stallone) snicker at the old ant behind his back and think the idea of an "Insectopia" is hilarious.

Meanwhile, the lovely Princess Bala (Sharon Stone) is living in the palace, but finds it dull and does not happily anticipate her upcoming marriage to General Mandible (Gene Hackman), or the idea of giving birth every ten seconds as Queen. She drags two ladies-in-waiting down to the workers' bar, where she dances with Z, who falls for her instantly. Z soon realizes however that he'll never see her again, so he convinces his friend Weaver to switch places with him for a day, just to see Princess Bala at a royal inspection, while Weaver gets to interact with some of the worker girls.

All does not go according to plan however, as it turns out the companies under royal inspection are immediately sent into an unexpected war with a nearby termite mound. Z is the only survivor through pure luck.

Meanwhile, Weaver, who has fallen for the career girl (and Z's work friend) Azteca (Jennifer Lopez), feels terrible about switching places, even though he too had no idea the army was about to go to war. However when he learns Z is the surviving ant and is now a war hero (despite not doing anything and left traumatized), he is ecstatic.

When Z meets the Queen (Anne Bancroft) and Bala again, she recognises him as the worker from the bar, unknowingly blowing his cover. Mandible is furious that a worker danced with his fiancée, and the nervous Z hides behind Bala, but it is assumed that he is taking her hostage. She beats him off quite easily, but in doing so they fall down a garbage chute.

Z is forced by a series of his own mistakes to flee the colony with a troop of soldier ants in pursuit. Since he cannot go back, he decides to go out looking for Insectopia. Bala doesn't know how to get back home on her own and has little choice but to go with him.

However, General Mandible has much more sinister plans in mind, both for Z and Bala, and for the entire colony...

Human shoes are gigantic to these ants.

Example of:
Humans Are Cthulhu

Human shoes are gigantic to these ants.