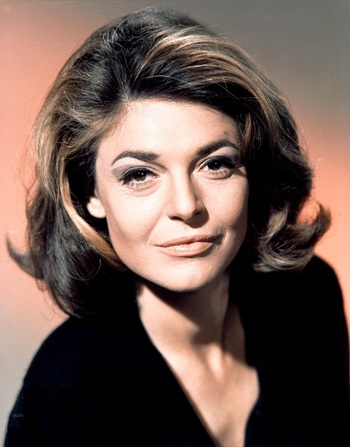 Anna Maria Louisa Italiano, better known as Anne Bancroft (September 17, 1931 – June 6, 2005), was an American actress associated with the school of method acting and respected for her acting prowess and versatility.

She was born The Bronx to the children of Italian immigrants, and raised in the Belmont neighborhood. She graduated from Christopher Columbus High School and later attended HB Studio, the American Academy of Dramatic Arts, the Actors Studio, and the American Film Institute's Directing Workshop for Women at the University of California. After appearing in several live television dramas as Anne Marno, she was told to change her surname for her film debut in 1952.

Bancroft led an award-winning career across film, theater, and television that spanned more than fifty years and ended with her death to uterine cancer in 2005. She was also married to comedian Mel Brooks from 1964 until her death; they had one child together, the actor and author Max Brooks.