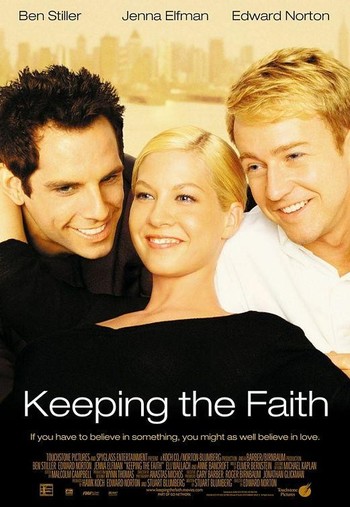 Keeping the Faith is a 2000 romantic comedy directed by and starring Edward Norton and co-starring Jenna Elfman and Ben Stiller. His directorial debut, Norton dedicated the film to his late mother, Robin.

Brian Finn and Jacob Schram are at the mercy of a schoolyard bully when Anna Riley arrives to stop him. The three become inseparable friends, until Anna's father takes a job in California and she moves away. Brian and Jacob stay best friends, grow up and enter into their respective careers: Brian (Norton) becomes a Catholic priest and Jacob (Stiller) a rabbi. When Anna (Elfman) returns to New York for work and re-connects with her friends, Triang Relations ensue.