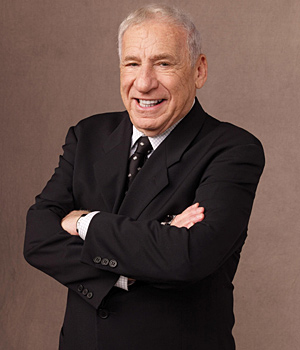 It's good to be the king!
"Tragedy is when I cut my finger. Comedy is when you fall into an open sewer and die."
Advertisement:

Mel Brooks (born Melvin James Kaminsky; June 28, 1926 in Brooklyn, New York) is probably one of the funniest men in Hollywood, and Broadway, and life in general.

Co-creator of the James Bond parody series Get Smart (with Buck Henry), and producer and director of many fine films — most of them affectionate parodies — such as Blazing Saddles, Young Frankenstein, The Producers, The Twelve Chairs, Silent Movie, High Anxiety, History of the World Part I, To Be or Not to Be, Spaceballs, Dracula: Dead and Loving It, and Robin Hood: Men in Tights.

Notably, Blazing Saddles, The Producers and Young Frankenstein occupy spots 6, 11 and 13 on the AFI's list of the 100 best comedies of the last 100 years. Did we mention that he's really funny?

He also produced David Lynch's drama The Elephant Man and David Cronenberg's The Fly but removed his name because he didn't want people to think they were comedies.

His record as writer, producer and comedian has resulted in him being one of the fourteen people to be an EGOT (An Emmy (4 of them), a Grammy (3 of them), an Oscar, and a Tony (3 of them)), the top awards of television, music, film, and theater, respectively), a lifetime achievement award from the AFI, as well as a fellowship from the BAFTA. Brooks himself jokes that the only award he hasn't won is "Woman Of The Year."

In the new millennium, he co-wrote and produced successful musical versions of The Producers and Young Frankenstein for Broadway. Following the success of The Producers, he and Anne Bancroft appeared as themselves on Curb Your Enthusiasm, intent on casting Larry David and David Schwimmer in the show in the hope that they'll kill the show and they won't have to bother with it. In other words, it's a Springtime for Hitler. Of course, like all Springtime for Hitler schemes, it fails.

Brooks is responsible for launching and boosting the careers of many comedians. It was he who gave Dave Chappelle his first credited role.

He also rapped as Hitler once

. In an interview for 60 Minutes, he stated that his life's goal was to reduce Hitler to a figure of such ridiculousness that no one would ever take his ideas seriously again. (If the numerous Tonys that The Producers won are any indication, it's working.) Being both Jewish and a World War II veteran, if anyone has N-Word Privileges to joke about Adolf Hitler it's him.

He met Anne Bancroft on a talk show and then bribed a woman in order to create a Meet Cute with her. Proving that being Genre Savvy has its perks, he was somehow able to convince Mrs. Robinson to become Mrs. Brooks. Their union resulted in Max Brooks, probably one of the foremost experts on how to repel and survive the oncoming Zombie Apocalypse. He has three other children from his first marriage to Florence Baum, which only lasted a few years. He attributes this to both of them being too young to know what they were getting into, and they've remained on good terms in all the decades since.

If you were a kid at The Turn of the Millennium, you probably know him best as the voice of Wiley the Sheep on Jakers! The Adventures of Piggley Winks.

And lastly, he is a Retired Badass World War II vet who used to defuse Nazi landmines for the Allied Forces. Then at the Battle of the Bulge, when the Nazis set up loudspeakers to play Fascist Propaganda at the Allies, Brooks set up his own loudspeakers and played the works of Jewish musical artist Al Jolson right back at them. He was making fun of Nazis back when they were still relevant ...and lived. It's good to be the king, indeed.

Tropes named by his works: