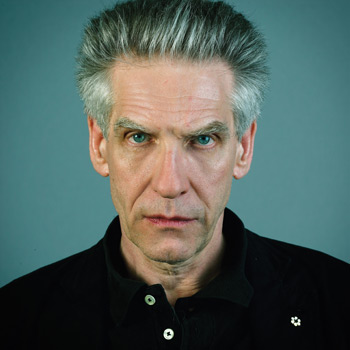 His most famous works include Scanners, the 1986 remake of The Fly (starring Jeff Goldblum), The Brood, Videodrome, eXistenZ, the film version of The Dead Zone, and the film "adaptation" of William S. Burroughs' Naked Lunch.

His Signature Style used to focus on Body Horror and Fan Disservice devices, with the occasional Mind Screw (especially making use of Through the Eyes of Madness). For instance, Scanners is the Trope Maker for Psychic Nosebleed, and The Fly the Trope Codifier for visual media depictions of Slow Transformation. His more recent works such as Spider, A History of Violence, and Eastern Promises tend toward less visceral and (relatively) subtler means of disturbing the audience. If anything, most of his works can be described as transgressive, pretty much universally forcing you out of your comfort zone to deal with the topics he puts on film — and it's rare for a Cronenberg film not to use the human body as an artistic canvas for those topics in one way or another.

In the late '70s/early '80s he often ran afoul of Canadian film review boards (in most of Canada, film ratings are assigned by government agencies at the provincial level), as some went so far as to ban his films in their jurisdictions. Cronenberg's animosity towards censorship ("Censors tend to do what only psychotics do: they confuse reality with illusion.") and the persecution of artists is a recurring theme in his work (eXistenZ being a prominent example, also inspired by his friend Salman Rushdie).

Actors notably appearing more than once in his filmography include Robert A. Silverman (The Brood, Scanners, Naked Lunch, and eXistenZ), Les Carlson (Videodrome, The Dead Zone, The Fly, and Camera), Jeremy Irons (Dead Ringers and M. Butterfly), Viggo Mortensen (A History of Violence, Eastern Promises, and A Dangerous Method), and most recently Robert Pattinson (Cosmopolis and Maps to the Stars). All of his films from The Brood onwards were scored by Howard Shore (with the exception of The Dead Zone, which was scored by Michael Kamen). He also tends to use a Production Posse of key crew members for his films, most notably editor Ronald Sanders, production designer Carol Spier, cinematographers Mark Irwin (from Fast Company through The Fly) and Peter Suschitzky (from Dead Ringers onward), and costume designer (and sister) Denise Cronenberg.

He has also done a bit of acting, including a prominent role in the Clive Barker film Nightbreed, a guest-villain role on Alias, a recurring role on Star Trek: Discovery, as well as a cameo in Jason X (directed by his visual effects man, James Isaac) and two cameos for fellow director John Landis in Into the Night and The Stupids.

This director's work in general provides examples of: