"If they thought this was gonna be easy, they came to the wrong fucking planet."
— Sam "Serious" Stone 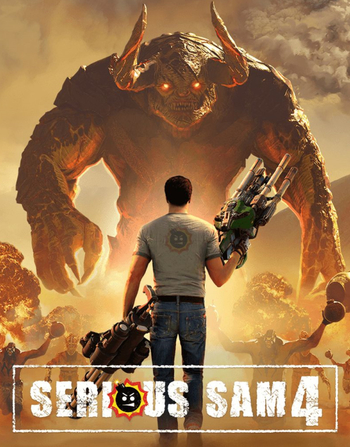 Serious Sam 4 (formerly known as Serious Sam 4: Planet Badass) is a First-Person Shooter video game developed by Croteam, published by Devolver Digital, and released on September 24th, 2020. It's the fifth main installment in the Serious Sam series. The game was released for PC (including Linux and Mac releases), Google Stadia (previously an exclusive of the console), and was later released on PlayStation 5 and Xbox Series X. The game was announced

for Q4 2014, though it has been continually delayed since, with the first hints of what it will be like since then coming in 2018.

The game is a prequel to Serious Sam 3: BFE, taking place in Europe during Mental's invasion. It features, once again, Sam mowing down thousands of enemies at the same time. The arsenal and gameplay mechanics from BFE have returned as well, so Sam is able to sprint and use iron sighting while mowing down the baddies. Vehicles have also made a return from Serious Sam II. A first for the series, the game also includes gadgets, items that can be found in secret areas and side quests and are able to be used at will.

This game shows examples of

Example of:
The War Sequence