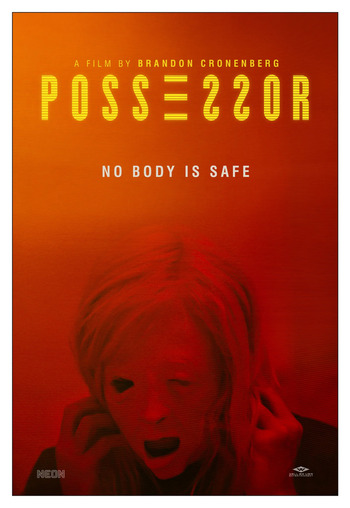 Possessor is a 2020 sci-fi psychological horror film written and directed by Brandon Cronenberg, his second feature after Antiviral. An international co-production between Canada and the UK, the film stars Andrea Riseborough and Christopher Abbott, with Tuppence Middleton, Sean Bean and Jennifer Jason Leigh among the supporting actors.

The film takes place 20 Minutes into the Future, where a secretive organization exists that uses brain-implant technology to inhabit other people's bodies, ultimately driving them to commit assassinations for high-paying clients.

Tasya Vos (Riseborough) is a corporate assassin who works for this organization, and while she has a special gift for the work, her experiences imitating other people have caused her to become detached from her own identity, and she suffers from thoughts of violence that she cannot separate from her home life.

Despite her fragile mental state, Vos signs on to a major job targeting wealthy CEO John Parse (Bean) and his daughter Ava (Middleton), which will be executed by possessing Ava's fiancé Colin (Abbott). However, both her mental strain and the unexpected nature of her target create grave complications for Vos, and she begins to lose control.

Possessor debuted at the 2020 Sundance Film Festival in January, and premiered in the US, the UK and Canada later that fall. There were notably two versions of the film released: Possessor and Possessor Uncut. Uncut, the unrated director's cut that screened at Sundance, is considered to be the definitive version of the film, as the other version underwent several cuts to obtain an R rating — mainly to remove several instances of graphic violence and nudity.