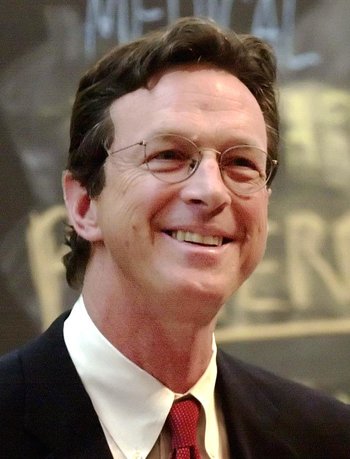 They were so busy trying to see if they could, they never stopped to think if they should.
"Books aren't written - they're rewritten. Including your own. It is one of the hardest things to accept, especially after the seventh rewrite hasn't quite done it."
Advertisement:

John Michael Crichton, M.D. (October 23, 1942 – November 4, 2008) was a bestselling American writer, most commonly working in the science fiction genre. He is known for his extremely technical writing style which openly favored scientific detail over character development and could be somewhat formulaic. The overall thrust of his books was the threat posed by blundering scientists who toyed with nature. Toward the end of his life, his stories were becoming more political and thus controversial.

His works often expressed a cynical view of corporate America and the scientific community. Many credited him with inventing the techno-thriller, although he himself acknowledged precursors such as Jules Verne, H. G. Wells and Arthur Conan Doyle.

As a young man, Crichton wrote spy novels under the name John Lange to pay for medical school. However, after a more serious effort written under a new alias, called A Case of Need — a murder mystery which featured an in-depth analysis of the issue of abortion — received widespread attention and won him an Edgar Award, Crichton decided to focus on writing rather than medicine.

His first novel under his own name was The Andromeda Strain, a very spare science fiction thriller about a team of scientists isolating and analyzing an extremely deadly single-celled organism of extra-terrestrial origin. It was a surprising runaway success, establishing Crichton very rapidly. He compounded his success with popular novels such as The Great Train Robbery, a somewhat fictionalized historical novel about the Great Robbery of 1885, and Congo, a modern take on old-fashioned African adventure stories, as well as the less popular The Terminal Man and The 13th Warrior. All of the aforementioned were snapped up by Hollywood, although Congo and Eaters of the Dead were not filmed until the 1990s. Nonetheless, by the end of the 1970s Crichton was a very wealthy man.

After a long hiatus during the eighties, during which Crichton traveled extensively and became interested in mystical concepts such as ESP, he returned to fiction writing with Sphere, which combined his trademark hard-line science with more fanciful ideas about psychic powers. Many of Crichton's fans regard Sphere as his finest work.

In 1990 he released his most successful work, the novel Jurassic Park, about a theme park where dinosaurs are created using genetic engineering. Not only did it sell millions of copies worldwide and get adapted into a massively successful film by Steven Spielberg (in fact, the highest-grossing ever made at the time), it sparked a renewed interest in Crichton, his older books getting reprinted and bought on a large scale, including A Case of Need, the nonfiction Five Patients, and the John Lange-era Binary. Film adaptations of Crichton's works also became suddenly commonplace, including adaptations of Congo and Sphere, although all but Jurassic Park were met with mostly negative reactions.

Crichton realized that Jurassic Park provided him with significant Protection from Editors, and took advantage of this to begin writing more controversial fare: Rising Sun, which analyzed US–Japanese relations; most specifically the statement that "Business Is War". Those versed in economics point out that he broke several laws of the universe (including making the standard "export good, import bad" mistake) in order to set up the Japanese as the Big Bad poised to conquer the world, though this did not seem to detract from its popularity at the time. The point was rendered moot with the collapse of the Tiger economy, making Crichton seem rather paranoid in the process. He followed that up with Disclosure, a gender role reversal of a typical sexual harassment case set in an early-'90s technology company.

He returned to technothrillers for a while after that, calming his critics by writing The Lost World (1995), his only sequel; Airframe, a book ostensibly about an incident on an airplane but more substantially about irresponsible journalism; Timeline, a foray into Time Travel which subverted Ye Goode Olde Days in a memorable fashion, and Prey, about runaway nanotechnology.

His Protection thus restored, he wrote the most controversial novel of his career, the Global Warming-critique State of Fear, which severely divided his fan base. The controversy over this novel continues to this day.

As this backlash annoyed his editors, he followed this up with Next, a relatively comedic look at genetic research, technology and copyright issues. Unfortunately, his tendency to run off on author tracts remained, as he spent a full page talking about a Washington journalist named Mick Crowley who was on trial for raping a baby and "had a small penis". This character just happened to share the same name and profession as a journalist who had been critical of Crichton's State of Fear, was entirely unimportant to the plot, and never appeared again.

He also wrote nonfiction works such as Five Patients, Jasper Johns, Electronic Life, Travels, and many essays and articles published in magazines and on his website.

Crichton was also a director and screenwriter, most famously of Westworld, about a futuristic fantasy resort populated by robots who eventually break down and turn on the guests, as well as adaptations of Robin Cook's Coma and his own The Great Train Robbery. However, his first attempted summer blockbuster, Runaway, fizzled: With a multimillion-dollar budget, big-name actors and a world-famous author as both writer and director, it was planned as 1984's major science fiction draw. However, it was overshadowed by a low-budget feature, starring B-list actors, and written and directed by an unknown — James Cameron's unprecedented blockbuster, The Terminator. His directorial career essentially ended, and he would not succeed with a summer blockbuster for another twelve years until the movie Twister, which he co-wrote with his then-wife Anne-Marie Martin (who also played Dori Doreau on Sledge Hammer!).

He also created and produced the hugely successful TV medical drama ER. The show was based on an unfilmed screenplay that Crichton had written in 1974; Apart from updating some of the medicine, the script was largely unchanged when it finally made the air in 1994. The show's success made Crichton the first writer to have written the number one television show (ER), the number one film (Jurassic Park) and the number one book (Disclosure) in the United States at the same time.

Michael Crichton died at the age of sixty-six after a long and protracted battle with lymphoma on November 4, 2008.

The first of three posthumous works, Pirate Latitudes, was published on November 24, 2009. It is set in seventeenth century Jamaica and follows the adventurers of Captain Edward Hunter, a privateer in service to England's King Charles II, as he raids Spanish shipping.

The second, Micro, was published on November 22, 2011. It's best described as Crichton's version of Honey, I Shrunk the Kids.

A third posthumous novel, Dragon Teeth, based on the notorious real-life rivalry between paleontologists Edward Drinker Cope and Othniel Charles Marsh in the 1870s, was released in May 2017.

Though Crichton himself had nothing to do with it, his name is on The Andromeda Evolution, a sequel to The Andromeda Strain written by Daniel H. Wilson with the blessing of Crichton's family.

Fun facts: He stood 6'9" (about 206 cm) tall. Before his illness, he was noted to look much younger than his actual age (in the page image, he was sixty years old). He has an uncredited cameo in the 1971 movie The Andromeda Strain as a doctor standing in the back of the operating room when Mark Hall is pulled from performing an appendectomy. He also climbed to the top of Mount Everest.

Books written by him: