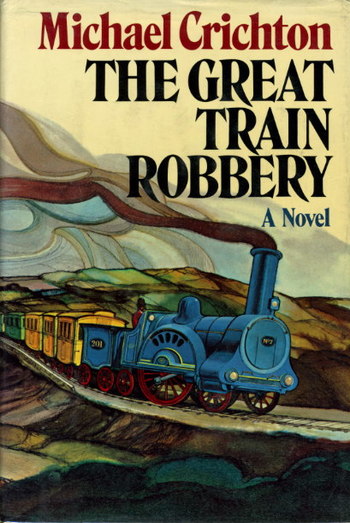 The Great Train Robbery is a 1975 crime and historical novel written by Michael Crichton. It tells the story of the Great Gold Robbery of 1855, a massive gold heist, which takes place on a train traveling through Victorian-era England on May 22, 1855. Most of the story takes place in London, England.

In 1854, Edward Pierce, a charismatic and affluent "cracksman" or master thief, makes plans to steal a shipment of gold worth more than twelve thousand pounds being transported monthly from London to the Crimean War front. He faces enormous obstacles as the bank has taken strict precautions, including locking the gold in two heavy safes, each of which has two locks, thus requiring a total of four keys to open. He recruits Robert Agar, a "screwsman" or specialist in copying keys, as an accomplice. He spends an entire year preparing for the heist, before he finally makes his move on May 22, 1855. Even though he and his accomplices get the gold, things end up falling apart afterwards.

A 1978 film adaptation (titled The First Great Train Robbery outside of the U.S., presumably to distinguish it from the silent 1903 Western film) (and possibly to avoid confusion among British audiences and others who might think of a real-life British train robbery in 1963) was directed by Crichton himself. It starred Sean Connery as Pierce and Donald Sutherland as Agar.

Judge: Now, on the matter of motive, we ask you: Why did you conceive, plan and execute this dastardly and scandalous crime?
Pierce: I wanted the money.