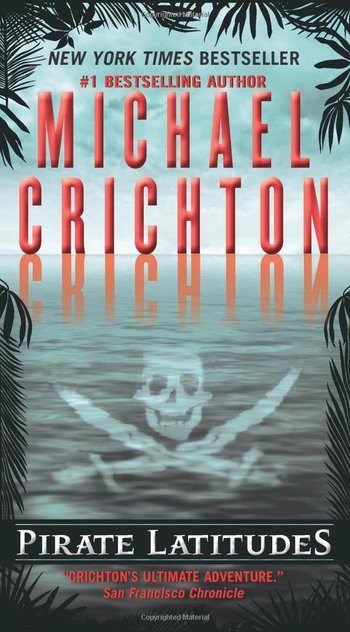 Pirate Latitudes is an action adventure Period Piece, and the final novel finished by Michael Crichton. It was found on his hard drive by his assistant after his death, and published posthumously, in 2009. The story takes place in The Spanish Main in 1665, centering on Privateer Charles Hunter, whom is tasked by the governor of Jamaica, James Almont, to steal a massive treasure fleet from an imprenetable Spanish fortress, called Matanceros, and the bulk of the stories centers on the adventures experienced by Hunter and his crew. A movie by Steven Spielberg has been revealed to be in production, and Spielberg's long time assistant David Koepp is working on it, but no further detalils has been revealed.

The plot of the novel, more detailed, goes as follows: In 1665, a ship arrives in Port Royal, carrying words of a large treasure of gold, mined by the Spanish in South America, and taken to the impenetrable fortress of Matanceros, awaiting escort across the Atlantic. Interested in acquiring the gold, James Almont, the governor of Jamaica, secretly orders Privateer Charles Hunter to retrieve the gold, promising him a share, against the request of Robert Hacklett, Almonts new Obstructive Bureaucrat assistant. However, the gold is guarded by Cazalla, the sociopathic Spanish commander of Matanceros, and Hunter, even after assembling his crew, is facing hardships. A short mention of the problems he experiences in route, can be summed up to: Getting captured by Cazalla, Climbing the Cliffs of Insanity at Matanceros, experiencing some serious Jungle Japes on the same island, including snakes and mosquitoes, fighting Cazalla's men at Matanceros, fleeing Matanceros, pursued by Cazalla's Dragon Ascendant, Bosquets, battling his warship, dealing with the hardships of The Load, Brainless Beauty Lady Sarah Almont, the governor's niece, a hurricane, a Cannibal Tribe, a Giant Squid, the Tyrant Takes the Helm, in the familiar form of Robert Hacklett in Port Royal, and finally, a significant betrayal by a crew member. It is a true adventure novel, in other words.