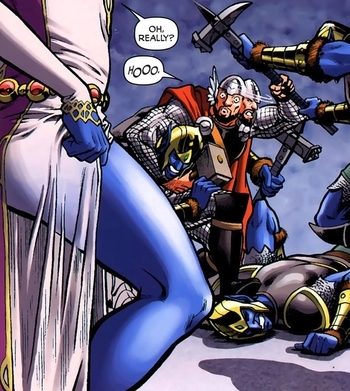 Calvert: Now listen. You've got to distract the guard.
Sue: How?
Calvert: Guess. [starts to unlace Sue's blouse] Don't! [blocks her slap] ...do that.
Sue: Well what do you expect?!
Calvert: Look, you're a very nice girl but the last thing I need is that, especially on a staircase.
Sue: What do I do?
Calvert: Just appear and lust will do the rest.
Sue: What if he doesn't fancy me?
Calvert: Well, that's all we need — a guard that's queer!
— When Eight Bells Toll (1971)
Advertisement:

A character (almost Always Female) provides a distraction by flirting with and/or showing some skin to an opposing guard, Spear Carrier and/or Red Shirt characters. Of course if you have large breasts it's a lot easier. And some characters are distractions all by themselves.

This trope does not mean characters whose outfit only covers their top half; that's Stripperiffic or She's Got Legs. This trope is probably the only reason a female warrior would even consider a Chainmail Bikini. Might be more directly applied via a Kiss of Distraction.

See also: Fanservice, Bath Kick, Distracted by the Sexy, Action Dress Rip. See also She's Got Legs, a more general trope about legs as fanservice. Compare Fake-Out Make-Out. See also I Have Boobs, You Must Obey!, where flirting and acting sexy is done to gain a favor, rather than distraction. Contrast Ignore the Fanservice.

This was not an issue in the original book, because that particular guard fancied himself a ladies' man and had already tried to seduce the woman concerned.

Jennifer shows off her legs to make a car stop.

Alternative Title(s): Distracting With The Sexy

Jennifer shows off her legs to make a car stop.