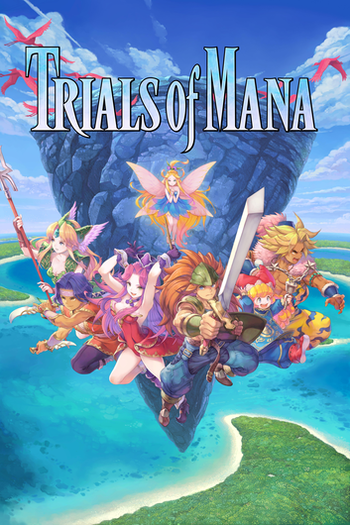 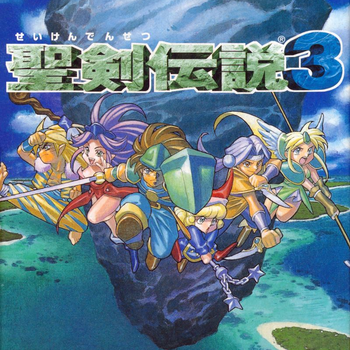 When the world was shrouded in darkness, the Goddess of Mana drew forth the Sword of Mana to smite the eight Benevodons, monsters of destruction.
She sealed the horrors inside the eight Mana Stones, bringing the realm back from the brink.
Advertisement:
Weak from rebuilding the world, the Goddess changed into a tree and fell fast asleep for years.
However, the forces of evil sought to free the Benevodons to gain control of the world.
They started a terrible war to further their plot and destabilize the kingdoms. Peace was at an end.
Mana itself began to disappear from the world and the Mana Tree to wither...
—Opening Narration

Trials of Mana, long known as Seiken Densetsu 3,note 聖剣伝説３, lit. Holy Sword Legend 3, but stating the name in romanji to denote its unreleased-in-English status was common from 1995 to 2019 is the third game in the World of Mana series. It was released for the Super Famicom (though pointedly not the Super Nintendo) in 1995. Trials of Mana was infamous for being the first Mana game to not receive an international release, though fan translations did exist via emulation. An official export was an incessant request from fans for over two decades; on June 11, 2019, twenty-three years, eight months and eleven days after the game's release in Japan, Trials in its original 16-bit form was announced for official release worldwide in English, French, German and Spanish as part of a Compilation Rerelease (Collection of Mana) on the Nintendo Switch—to be followed by a full-3D remake on April 24, 2020 for the Switch, PlayStation 4, and Windows PC. The remake was then brought to Android and iOS devices on July 15, 2021.

The Mana Tree is dying (again), so the Mana Goddess sends her faeries to the world below to find someone worthy of restoring it. All but one perish en route due to the steady loss of magic, and the remaining Faerie settles for the first schmuck it can find. Naturally, he/she happens to be the latest incarnation of the Mana Knight.

Trials plays like a souped-up version of its predecessor, Secret of Mana. The percentage meter, which limited the frequency of melee attacks, is gone. Secret's charged attacks have been replaced by Limit Breaks (or "Techs"). The Tech meter builds with each successful hit on the enemy. Each character has a unique weapon type, and there is no leveling up spells or weapons like in Secret. (A wise choice, because the Level Grinding in Secret was tedious.) You can also store items in your backpack and switch out which ones you want on your item ring. This increases your survivability, as you can now carry more than nine healing items with you as you travel. However, to retain challenge, the game doesn't allow you to access this menu if enemies are on-screen.

In a departure from the rest of the series, Trials revolves around six characters of which any three can make up your party; your first choice determines who in the Big Bad Ensemble you eventually take on. Each comes with a unique set of skills, made more complicated by divergent class progressions: Your teammates start the adventure in a default job, but have opportunities to pursue Light and Dark paths later on.

Storywise, it would later get a prequel in the form of Heroes of Mana.