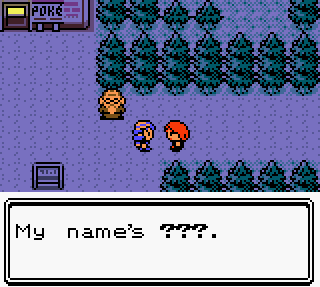 Ah, Mark the Third. Good to see you.note He told you his real name, and you get to "report" it to the Police Officer.
???: My name is ???!
Whitney: That is an odd name.
???: I was never given one, so I assigned myself one.
Killdra: So you settled on being called ???, spelled out like 3 question marks and pronounced like when you ask something 3 times in a row? Thats lame, really lame, even by DSBT standards.
— DSBT InsaniT
Advertisement:

When the name of something — be it a character, object, location, or menu item — is unknown in a video game, it will often be represented by a string of question marks.

One of the simplest and most prevalent video game interface tropes.

The reasons for this vary (see below), and the result can range from confusion to an Interface Spoiler. See also No Name Given.

Confused Question Mark is for a different meaning of the symbol. Can be related to My Name Is Inigo Montoya.

(If you're looking to pothole this trope, it's written like MyNameIsQuestionMarks.)