Video Game / The Other: Airi's Adventure 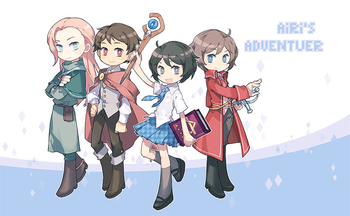 The Other: Airi's Adventure, is, as the title notes, a game about Airi, and an adventure she has.

It is a RPG made in RPGMaker MV and was published on Steam, in 2019, by Rabbiton, with a demo available at the game's Itch.io page.

In a modern-day setting, Airi, and her classmate, Luca, surprisingly meet in a park that they both use as a secret base, but, unknowingly, have walked into an Alternate Universe where Airi has an Alternate Self that's a guard captain, and her guards are looking for her, and mistake Airi for her instead.

And so, Airi and Luca start their adventure to try and get home from this world that looks like a Medieval European Fantasy.

Has a Changing of the Guard in its Immediate Sequel of The Other: Rosie's Road of Love, where Airi and Luca's adventures are mentioned in the background.

The Other: Airi's Adventure contains examples of: