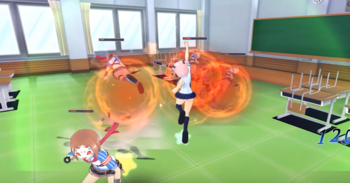 Never a "dull" moment in the classroom.
Advertisement:

If Real Life (and media) has taught us anything, schools can be far from the most fun places on the planet. With all the tests and exams you have to study for and the social peer pressure from your fellow students, schools can be very stressful places. You would think schools are ill-fit to be Video Game Settings because of this, but it can be just the opposite.

School Setting Simulations are your obligatory schools, now in video game form! Whether be it elementary, junior high, high school, or college and university campuses, a school setting offers a variety of classrooms and other hallmarks to explore, like student dormitories, gymnasiums, outdoor fields, locker rooms, cafeterias, the library, staff lounges, the principal/dean/headmaster's office, the occasional boiler room, swimming pools for a Pool Episode, or the school's rooftop, the latter two being particularly common in Japanese settings. School settings tend to lean on puzzle solving and Alphabet Soup Cans to keep the learning theme intact, and the puzzles will be presented in a way that's not as frustrating to players as simulating actual schoolwork. Real-time class sessions are entirely omitted from gameplay.

Expect enemies to be your usual bullies, delinquents, sports jocks, and (if you're rebellious enough) the faculty and staff themselves. In more supernatural settings, you'll encounter monsters and sometimes ghosts as well, especially if it happens to be a Wizarding School or All-Ghouls School.

School settings rarely show up in platformers due to less material for developers to work with (unless they're part of a greater Metropolis Level), and are sometimes mere backdrops for a climactic battle, but they are abundant in RPGs, beat-em-ups, puzzle, survival horror, and mystery games. In regards to shooter games, this setting can be controversial because of numerous school shooting incidents that happened in real life, and are often discouraged from being included in the games for moral reasons.

To be an example, the school needs to be fully explorable in some way on the player's whim. Cases where schools are just menu dressing or quick-stops to gain information or upgrade stats don't count, nor do schools that are only present in cutscenes or scripted events outside the player's control. This means that straight Visual Novel examples (with the exception of games that use the visual novel style for storytelling) are excluded because the player is not actively exploring the school, just seeing it through the protagonist's eyes.

May overlap with Boarding School, Academy of Adventure and Elaborate University High.