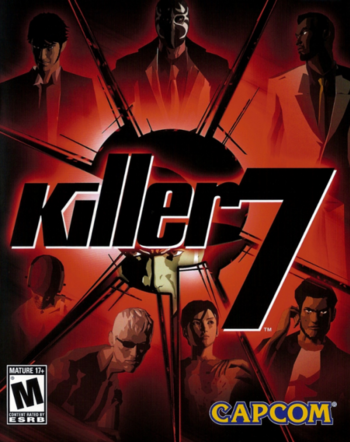 Step Into The Mind of An Assassin!note The Smiths (clockwise from top-left): Dan, MASK de, Garcian, Coyote, KAEDE, Kevin, and Con, with Harman in the center.
Harman: You're awake from your dream?
Kun Lan: Harman, the size of the world has changed. It's changed to the size where you can control it with your hands just like a PDA. The world will... keep getting smaller...
Advertisement:

Killer7 is a 2005 Action-Adventure game for the Nintendo GameCube and PlayStation 2, developed by Grasshopper Manufacture, and written and directed by Suda51 (with Resident Evil alum Shinji Mikami co-writing), that combines unusual gameplay mechanics and conspiratorial themes in a techno-thriller setting. In an alternate timeline 20 Minutes into the Future, worldwide peace has finally been achieved after a total ban on nuclear weapons and research.note and the Internet. And airplanes. The remaining warheads are fired into space, where they collide and destroy each other.

However, this peace was not to last, for a group known as "Heaven Smile" soon appeared. Led by the enigmatic Kun Lan, this group of ambiguously human terrorists began to carry out a number of suicide bombings across the world, with no discernible purpose other than to create terror for the sake of terror.

To combat this supernatural threat, the American government calls on the services of the Smith Syndicate, a.k.a. the Killer7. Led by the elderly and wheelchair-bound Harman Smith, a man who carries a history with Kun Lan, the Killer7 are a group of specialized assassins trained to deal with high-level threats to the stability of the United States of America. And with each mission completed, they slowly draw closer to the truth behind the Heaven Smiles and Kun Lan.

While this plot summary appears clear and concise, it only scratches the surface of the story of Killer7. As the Smiths keep getting called in to deal with each new threat from Kun Lan, a deep conspiracy with ties to the origins of both Killer7 and the Heaven Smiles comes to light, and dozens of twists and turns follow.

With that, we depart from the realm of sensibility. Killer7 can become an exceedingly confusing game, thanks to its multiple layers of metaphor and symbolism, its vignettes and non sequiturs, and its tacked-on plot threads that don't come together until the ending—and even then, you're likely to have more questions than answers. Themes of war, religion, personal conflict, and politics all weave into one gigantic Mind Screw, wrapping around each other like the bondage straps around Iwazaru.

In contrast to the Mind Screw storyline, the developers uniquely streamlined the gameplay of Killer7: a character moves along a set of predetermined paths, so all a player can do is choose forks and turn around. When attacked, players hold down a button to switch into first-person view and aim crosshairs manually (similar to Resident Evil 4). The Heaven Smiles remain invisible until players use another button to scan for them; as they approach, players can see an obvious glowing spot upon them, and while shooting this spot results in their instant death, players will find it difficult to do so. Any enemy who gets in too close to the player will laugh at the player before exploding and causing damage. Death Is a Slap on the Wrist most of the time — as Garcian can retrieve the severed heads of the other Smiths and revive them — but if Garcian himself dies, the game ends. The Killer7 themselves are as follows:

While players can practically count the polygons in the characters' faces, the game makes excellent use of shading and shadows to create a unique graphical style. Two levels also feature anime cutscenes, both done by different studios.

The game was developed by Grasshopper Manufacture, and published by Capcom. See also earlier Suda games The Silver Case and Flower, Sun and Rain, games in the "Kill the Past" universe that contain thematic links, as well as Killer is Dead for a later Grasshopper game with a similar visual style and premise.

On May 26 2018, Suda and Grasshopper Manufacture announced an HD port

of the game to PC, with NIS America in charge of publication. This version released via Steam in November.

In the name of Harman...

Harman Smith: You're awake from your nightmare.

Kun Lan: Harman. The world won't change. All it does is turn. Now, let's dance.