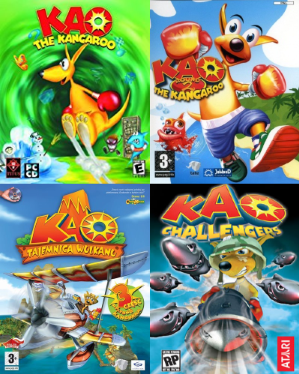 Kao the Kangaroo is a series of platformer games made by a Polish studio named Tate Interactive, starring the titular marsupial with boxing gloves. Each game has him go on a quest to save his animal friends from some kind of danger, primarily the animal-catching Hunter. The series was mostly popular in Poland, having not made much of an impact in the foreign markets.

The series consists of several titles:

In 2020, Tate Multimedia (Tate Interactive's new name) announced that a fourth Kao game was in development. It was officially unveiled in January of 2022, simply named Kao the Kangaroo. It was released on May 27, 2022. See the trailer here

Alternative Title(s): Kao The Kangaroo Round 2