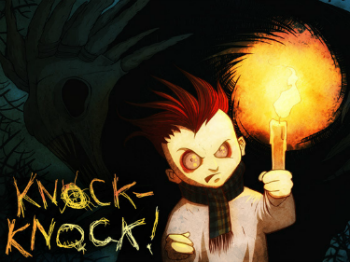 Ready or not, here I come.
A horror game created by Ice-Pick Lodge, the same folks behind Pathologic, Turgor, and Cargo! The Quest for Gravity. The game was successfully funded through Kickstarter, and can now be purchased on Steam.
Advertisement:

In Knock-knock, you play as The Lodger, a disturbed young loner, as he's caught in a nightmarish loop of suddenly waking up in an unfamiliar house again and again, without the security of knowing what's real and what's just a part of his dream. But with those visitors after him, who cares? Whether it's all real or not, the only reassurance he'll get comes with the dawn.

The basic gameplay is simple, but the game doesn't hold your hand through even the basic mechanics. You wander through a randomized house avoiding horrific monsters, as you run the clock out until dawn. Hiding rewinds the clock, and you can only hide behind furniture, so sometimes it's better to outright run.