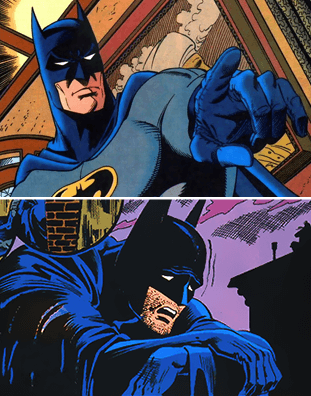 Even the Dark Knight can't keep brooding forever.
"You're not hurt, Watson? For God's sake, say that you are not hurt!" It was worth a wound - it was worth many wounds - to know the depth of loyalty and love which lay behind that cold mask. The clear, hard eyes were dimmed for a moment, and the firm lips were shaking. For the one and only time I caught a glimpse of a great heart as well as of a great brain."
— Sherlock Holmes, "The Three Garridebs"
Advertisement:

Not So Stoic is what happens when the Stoic is pushed to the edge, and falls off. This is when the Stoic loses their façade and shows the world (or just their True Companions) that they aren't an emotionless automaton. They may be good at hiding it but they feel just as much as the rest of us. Likely to be very heartwrenching or extremely terrifying or both.

In order to qualify, the show of emotion must be a significant one, not just a small smile or subtle frown. This emotion need not be a "negative" one: Manly Tears over the death of a teammate are certainly un-stoic, but so is unfettered joy over their return.

These outpourings of emotion usually happen only a few times throughout the series — if the stoic is showing emotion every other episode in every season, then they aren't much of a stoic. However, these moments can also be used to illustrate a character's growth towards becoming more open to others, in which case displays of emotion — overt and subtle — would become more frequent over time.

Compare with Not So Above It All, OOC Is Serious Business, Sugar-and-Ice Personality, and Did You Think I Can't Feel?. Contrast with Past Experience Nightmare (where The Stoic can keep it buttoned up — while awake), Rage-Breaking Point. See also Corpsing, when a character (or actor) is trying to be serious but fails and breaks up into laughter, and Cathartic Crying, for when a character who hardly ever cries (whether because they're The Stoic, or a Stepford Smiler, or some other reason) finally breaks into tears.

When Played for Laughs or poorly written, it's an Out-of-Character Moment. Always a Sub-Trope of The Stoic (non-stoic characters are expected to display emotion whereas a Stoic character displaying an emotional reaction demonstrates a crack in their normal personality). Sometimes overlaps with Alternate Catchphrase Inflection.

WARNING: Many Spoilers Ahead!

I AM Gordon! Stop! Stop!

Big, stoic Gordon is downright horrified when Bill and Ben joke about either scrapping or drowning him.

I AM Gordon! Stop! Stop!

Big, stoic Gordon is downright horrified when Bill and Ben joke about either scrapping or drowning him.