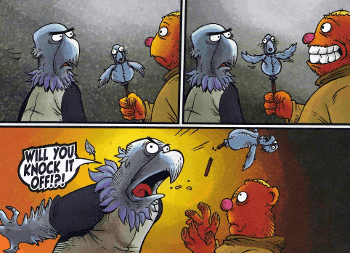 Thibaut Courtois: Hey you guys, sorry Gareth bailed, but thanks for taking the rest of us out!
Lionel Messi's Puppet: Now you are just like your season: Totally wasted!
— The Champions
Advertisement:

Depending on your audience, puppetry/ventriloquism/etc. can either be fun, a real talent or just plain creepy. You can use a dummy or puppet to entertain children, to show off a budding skill or to frighten others by it being possessed by evil, possessing you into evil or even possessing someone else into evil.

This trope, however, lies somewhere in the middle: it isn't evil, per se, but it can still be pretty malicious in its intent. A mocking hand puppet or what have you is usually modeled after the character being spoofed (but having another mocking puppet in the form of an animal meant to represent a human character for example can also exist) can be a rather unflattering portrayal of another character, usually exaggerating their appearance and/or behavior out of embarrassment, especially since this trope is almost always in front of a crowd.