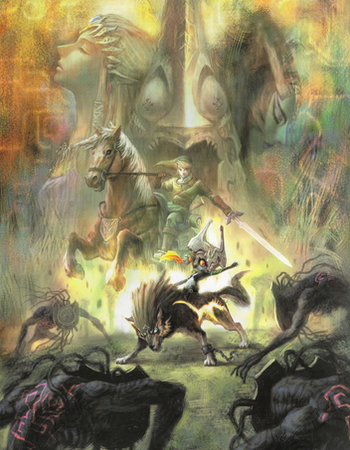 Those are only for the one who carries the blood of the hero... the one whose spirit is that of the sublime beast.
"Shadow and light are two sides of the same coin… One cannot exist without the other."
— Princess Zelda
Advertisement:

The Legend of Zelda: Twilight Princess is the thirteenth game in The Legend of Zelda series, released in 2006. Both a launch title for the Wii and the final first-party release for the Nintendo GameCube, the game later received with a remastered version a decade later on the Wii U.

In Twilight Princess, Link is a mere farmhand living a passive life in peaceful Ordon Village. This peace is shattered when strange shadow monsters invade and kidnap some of the children, including Link's best friend Ilia. Pursuing them, Link discovers that most of Hyrule has become drowned in "Twilight": an oppressive darkness where monsters thrive and life is frozen. What's more, this Twilight curses him into the form of a wolf, which brings with it a whole new set of abilities (like a wolf's sense of smell). Fortunately, his lack of opposable thumbs is made up for by a sarcastic imp named Midna, a denizen of the Twilight who allies with Link for her own mysterious reasons. Together they must fight Zant, the King of the Twilight, who seeks to rule over both the realms of light and shadow.

The game featured a realistic graphics style that had been eagerly anticipated by fans since Ocarina of Time. A main feature is that Link can (eventually) shapeshift at will between his Hylian and wolf forms in order to solve puzzles and pass obstacles. The game also features more complex character development than most other titles have had (Link, in particular, has an actual life before the whole story starts), attempted to include a bit of moral complexity (primarily Dark Is Not Evil) and is the first to feature a character whose lines are fully "voiced" (Midna, even though it's just a selection of gibberish syllables).

Twilight Princess offers new variations on the Zelda story, but still sticks to the series formula of "gather first set of Plot Coupons, Master Sword, gather second set of plot coupons, final dungeon", trademarked by A Link to the Past. However, this is done much differently in Twilight Princess in regards to function: the order of plot events is almost reversed from previous titles, and familiar items and locations show up in a much different context.

The dual-console release of Twilight Princess is something of a coincidence. Originally developed solely for Nintendo GameCube, its development cycle took so long that the Wii was preparing to launch by the time it was done. Therefore, the game was somewhat hastily ported to the Wii's launch line-up, with the addition of motion controls for the sword and bow so that a swing of the Wii Remote would swing Link's sword. While this was great advertising, Nintendo hit a Spanner in the Works when they remembered that Link is left-handed, unlike a good 90% of the human race. Their fix was to flip the entire game left-to-right so that Link would hold his sword in the same hand as most players. Ironically, the Wii Remote was the only controller in the Console Wars that was fully ambidextrous up until the release of Kinect and PlayStation Move. History repeated itself nearly a decade later with the release of Breath of the Wild on the Switch, which again took so long to develop that it was released as a launch title for the system following the one it was developed for.note although this time with much better control porting. As such, Twilight Princess can be seen as something of the start of a series tradition in this regard.

In 2011, alongside other Wii games released in 2006 and 2007, it was re-released under the Nintendo Selects category. In 2015, an HD remaster co-developed by Australian studio Tantalus Media was announced for the Wii U and released on March 2016, which included 1080p HD retextured, amiibo compatibility (including a new Wolf Link figurine created for the game), and the same functionalities featured in later console installments, such as gyro control for arrows and slingshots as well as Inventory and map placement on the Gamepad. While the main quest is based on the GameCube version, Hero Mode mirrors the entire game like the Wii version.

As mentioned elsewhere, Twilight Princess is generally Darker and Edgier than other Zelda titles, and is thus far the only main series Zelda game to be rated T by the ESRB.

In 2016, the game received a manga adaptation by Akira Himekawa.

Rusl talks to Link about their strange wood. Danny hints more blatantly at the naughty implications.

Rusl talks to Link about their strange wood. Danny hints more blatantly at the naughty implications.