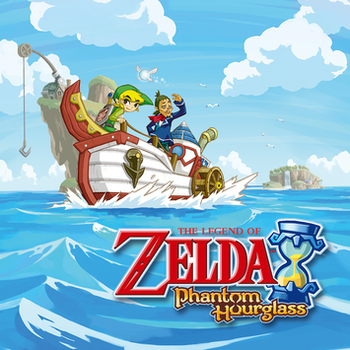 Take Control of an Epic New Adventure!
Ciela: Linebeck! You fled the second you heard about monsters in the temple!
Linebeck: No! Of course not! I suddenly got worried about my ship!
Advertisement:

The fourteenth game in The Legend of Zelda series, released in 2007, Phantom Hourglass is a sequel to The Wind Waker and stars the Hero of Winds once again. Unlike previous Zelda games, there was also a single central dungeon, the Temple of the Ocean King; beating other dungeons would allow the player to progress farther in the Temple, which would open up more dungeons, and so on. The Nintendo DS game is entirely stylus-based, with the bottom screen consisting of most of the action and the top screen containing a map that the player can bring down and mark for clues.

The plot picks up right after The Wind Waker, with Link sailing with Tetra's crew on the trail of the mysterious Ghost Ship. When the ship is in sight, Tetra goes aboard and disappears, prompting Link to go on after her. He is tossed from the ship, and wakes up on a strange island where a fairy named Ciela finds him. During his quest to save Tetra, he meets up with Linebeck, the captain of a steam boat, and the wise but mysterious old man Oshus. Oshus gives Link the titular Phantom Hourglass to ward off the curse placed over the Temple of the Ocean King by Bellum, a demonic creature that is steadily sapping the life out of the realm. It's up to Link to find Tetra and slay Bellum before he sucks the last of the realm dry.

The game also includes a two-player battle mode, playable either over local wireless or online, where the players compete for control of Force Gems in alternating rounds, either controlling Link or a group of Phantoms.