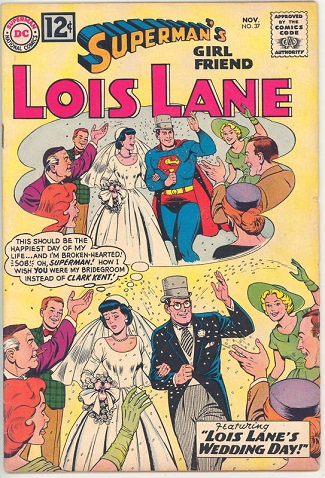 The man of Lois Lane's dreams is closer than she thinks.
"I am tired of being my own rival!"
— Christian, Cyrano de Bergerac, Act IV
Advertisement:

The main love interest of the Part-Time Hero. The problem: she won't give him a second glance because she's in love with someone else. The complication: that someone else just happens to be the hero's Secret Identity. He wouldn't dare tell her and burden her with all the risks that come with being a Secret-Keeper, which, quite frankly, is moot since she automatically seems to be a magnet for Monster of the Week attacks anyway when she isn't running towards them.

This trope may overlap with Secret Identity Identity: the love interest reacts differently to the "super" and "normal" personas of the hero. Eventually, she may even begin showing affection to the persona that she'd been uninterested in originally (wonderful wish-fulfillment fantasy fodder, this).

In the best-case scenario, she'll discover the truth by pure accident, which somehow makes it more okay than if the hero had told her (or not, expect fireworks at being Locked Out of the Loop). In the worst-case scenario, after the masquerade-maintaining It's Not You, It's Me, she'll eventually hook up with some other civilian besides the hero, who just wants his beloved to be happy. Is it any wonder The Masquerade Will Kill Your Dating Life?

How come love can't always be as simple as Dating Catwoman?

Compare Hates My Secret Identity, for non-romantic cases of people reacting differently to the two identities. See also Likes Clark Kent, Hates Superman, which is when a character has positive feelings to a person but negative ones to their alter ego / secret identity.