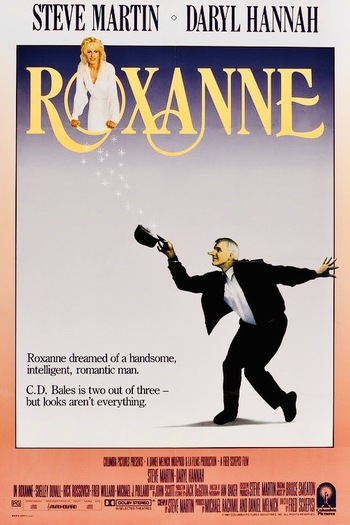 "What makes Roxanne so wonderful is not this fairly straightforward comedy, however, but the way the movie creates a certain ineffable spirit. Martin plays a man with a smile on his face and a broken heart inside – a man who laughs that he may not cry. He has learned to turn his handicap into comedy, and when a man insults him in a bar, he counterattacks with 20 more insults, all of them funnier than the original. He knows how to deal with his nose, but he has never learned how to feel about it."
—Roger Ebert, in his review of the film
Advertisement:

Not your average Romantic Comedy, this 1987 film, directed by Fred Schepisi and starring Steve Martin (who also wrote the screenplay) and Daryl Hannah, is a Setting Update of the play Cyrano de Bergerac.

It tells the story of Charlie "C.D." Bales (Martin), the long-nosed fire chief of a small Quirky Town in the Pacific Northwest, and Roxanne Kowalski (Hannah), a visiting astronomy PhD student. C.D., in love with Roxanne from the start but violently self-conscious about his schnozz, settles for helping a handsome but ditzy and awkward fireman (Rick Rossovich) woo her. The results are predictable, if you know the story, but the humor surrounding the town and C.D.'s nose set the movie apart. While not as highly acclaimed as the more faithful 1990 film adaptation of Cyrano, it's still considered an enjoyable film in its own right and one of the biggest highlights of Martin's acting career.