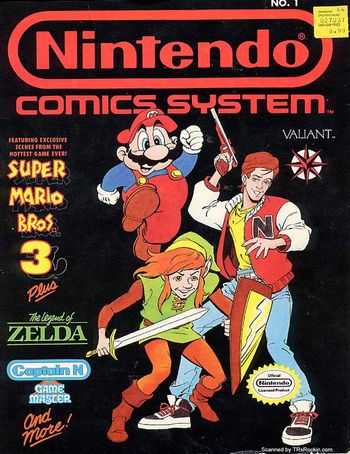 The Nintendo Comics System, first published in 1990, was an early and short-lived imprint of the comic book company Valiant Comics. As the name suggests, it was a series of comic books based on the popular Nintendo video game franchises and their cartoon spin-offs. The titles published within this imprint included stories based on:
Advertisement:

Unfortunately, despite Nintendo's prominence in the video game market at the time, the comics apparently did not sell very well; arguably, the Zelda comics were the most popular and had the longest run. They were all discontinued right around the time the Super NES was launched (though as Nintendo Power showed the following year, it was not the end of Nintendo comics in general).

The comics are archived here

, although a few stories are missing.

These comic books contain examples of: