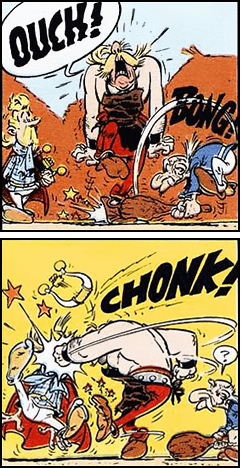 Some retaliation exceeds what's being retaliated to in its severity. But some retaliation isn't even along the same line; it's directed at those who can't reasonably be blamed for what you're retaliating for, except according to exceedingly shaky justifications, or even no real justification at all. Whether it is worse than what is retaliated to or milder, the point remains that it is still indefensibly directed at the wrong targets.

Closely related to Mis-blamed, a Sister Trope to Revenge by Proxy and so more often than not Moral Event Horizon-worthy, and similar to Guilt by Association Gag and Karmic Misfire. I Will Punish Your Friend for Your Failure is when one uses this trope as a threat. It's one of the many ways in which a Cycle of Revenge can get ugly. Avenging the Villain is also related, since The Hero (or whoever killed the villain) is usually either blameless or justified. Yet another related trope is Bewildering Punishment, which is what this trope probably feels like from the victim's POV. The Chain of Harm can result if the victim goes on to inflict this on somebody else. For cases where someone deliberately ensures this happens, see Frame-Up and The Scapegoat.

See Murder by Mistake when this trope is taken to the extreme.