Silly Rabbit, Idealism Is for Kids! 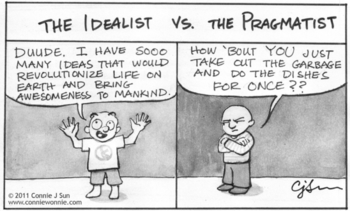 "Innocence is chrysalis, a phase designed to end. Only when we are free from it do we know ourselves."
— Eleanor Lamb, BioShock 2

When a character (primarily in dramas) is asked to go beyond their job and help with "a cause", the character sometimes refuses, and afterwards the other person asks, "What's happened to you?" or "Since when did you stop caring?" the answer sometimes comes down to the character saying, "I grew up," implying that the character "grew" from a Wide-Eyed Idealist to an embittered cynic. It's also often used by the Anti-Hero or Straw Nihilist to mock the idealistic methods and beliefs of the Ideal Hero and his ilk; such naive and childish wishful thinking has no place in the grown-up, paranoid, cynical world that the Anti Hero lives in. Alternatively, a Retired Badass might have genuinely gotten too old or set in retirement to do what's being asked of them.

Considering that many shows and media that are on the idealistic end of the Sliding Scale of Idealism vs. Cynicism or are just plain Lighter and Softer with simplistic plots are primarily targeted towards children, while cynical media with more controversial plots are often targeted to adults or attract controversy from Moral Guardians, there can often be a tendency, especially among more cynical people, to associate idealism with childish or simplistic thinking, something to outgrow, rather than an actual, legitimate, motivatingnote  Although it's generally conceded that people need at least some form of idealism (or, more cynically, some self-deception that can pass for it) / goal in mind to have any motivation at all, even if the ideal / goal in question is just the pursuit of some more money or plain survival. Someone completely lacking in any ideals would live an extremely short life of total apathy, ending in starvation. philosophy that adults can also make use of. This conditioned bias is a major reason for why many people believe True Art Is Angsty.

It should be noted that a secondary reason is the association in working class culture between adulthood and the abandonment of lofty goals. The general idea is that you get a job and stop daydreaming, and eventually come to peace with the idea that you probably won't be famous or single-handedly reshape the world, and is as much a survival mechanism as it is crab-bucket reflex.

Sometimes the result of the character crossing the Despair Event Horizon. The Sour Supporter often expresses it, especially in the face of Least Is First. May be accompanied by a warning that Hope Is Scary. Subtrope of Jade-Colored Glasses. See also Silly Rabbit, Romance Is for Kids!. Could also overlap with Obstructive Bureaucrat, and Noble Bigot with a Badge.

Expect this phrase to be uttered in Crapsack World settings and Real Life. Especially by the more Machiavellian Realpolitikers when they lecture idealists about the deceptive dog-eat-dog world of international relations. Also hordes of edgy teenagers, but the pro-idealism side of things has plenty of those as well.

Contrast Good Is Old-Fashioned, where idealism is regarded as only for the children's grandparents. The intent is much the same: To imply that the good/idealistic person is unfamiliar with the here and now. The character may say that what they are dealing with is Above Good and Evil, and the idealistic character should not drag in such childish morality.

It's not all one-way, however; the idealist may fire a few shots back in return. The cynic may be dismissed as a 'sell-out' who gave up on doing the right thing for their own selfish gain under the false pretense of logic and realism. For instance certain characters just aren't willing to jeopardize their careers, and livelihoods just to change the status quo (this could be Truth in Television depending on how romantic one is and who you happen to be looking at). Or maybe he'll even be called a 'coward' and a weakling who gave up the good fight because he found it too hard and instead resigned themselves to wangsting about bad things.

Compare and contrast Knight in Sour Armor, who still hold ideals, just not as idealists; a converted holder of Silly Rabbit, Idealism Is For Kids! views may turn into this, keeping to the appearance of cynicism while reluctantly pursuing idealistic goals. Also contrast Silly Rabbit, Cynicism Is for Losers!, for when excessive cynicism and pessimism turns out to be just as blinding as too much idealism or optimism (or when idealists call out cynics on their attitude, as above).

A direct antithesis of Good Is Not Dumb. These characters could also fit under the Stopped Caring trope.

General Tsao believes that having obedient servants are better than having loved ones and friends.

General Tsao believes that having obedient servants are better than having loved ones and friends.