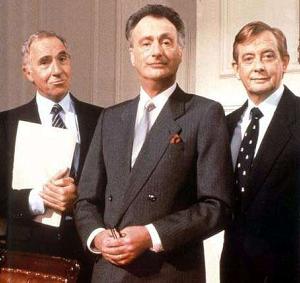 'Almost all government policy is wrong, but frightfully well carried out.'note  Left to right: Sir Humphrey Appleby, Jim Hacker, Bernard Woolley.
Sir Humphrey: Minister, I have something to say to you which you may not like to hear.
Jim Hacker: Why should today be any different?
Advertisement:

Ranking sixth in Britains Best Sitcom, the show has quite a legacy. Humphrey the cat