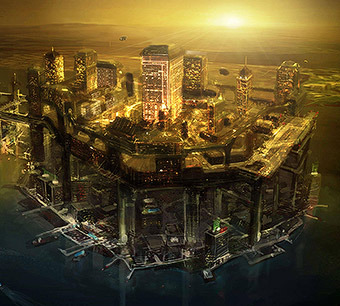 The Wretched Hive below does no justice to the view from the window of your Mega-Corp Star Scraper? No problem. Cover it up.
"There ain't a side of the tracks more wrong than 'under' 'em."
— Augustus Sinclair, BioShock 2
Advertisement:

The natural extreme of the Skyscraper City, making it even more enormous and overbuilt. A Skyscraper City is when the city seems to consist entirely of skyscrapers that rival the construction of Dubai (and then some) but the Layered Metropolis is when the city planners went even further by adding more streets, and even buildings, very far (or sometimes not that far) above the city. This tends to go hand in hand with Under City and Absurdly-Spacious Sewer, due to both the aesthetic and to large sewer systems being a relatively intuitive way of adding a lower layer to a city.

Maybe they realized how inconvenient it might be to take an elevator down a hundred stories or so, cross the street, then go back up the other building's elevator. Or they might have been worried about wiring, plumbing, or public transportation. Exactly how people take the car to these levels or get plumbing that high up will almost never be addressed, and similar questions as those raised by the Skyscraper City are also rarely addressed-such as the population needed, the construction methods, or how any of this is structurally sound.

Predictably, there will be Urban Segregation where the rich will always be a majority on the top, and the lower classes will have the bottom. Which presents an intriguing dichotomy as one neighbourhood becomes slowly and literally overshadowed by another level, and thus more unfashionable. Similar to the Skyscraper City, if the issue of population is brought up, it will usually be in a dystopian setting where overpopulation plagues the planet or at least big cities.

It is also a sub-trope of Skyscraper City, making it a sub-subtrope to Mega City. It fits very well in Cyber Punk settings. The Hive City will often be portrayed as having this kind of layering as well. Compare City Planet (which lends itself more to this than the Skyscraper City), Star Scraper, and Sci-Fi Writers Have No Sense of Scale. Has surprisingly little to do with Layered World.