His Name Really Is "Barkeep" 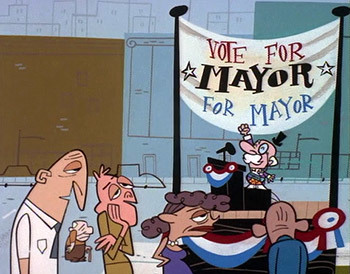 At least his parents didn't name him Undersecretary Of Housing And Urban Development.
"Wait, your last name is Reaper? Why did I always think it was Snugglebottom?"
— Billy, The Grim Adventures of Billy & Mandy
Advertisement:

As its supertrope, Everyone Calls Him "Barkeep" trope says, some characters have the misfortune of being known only by their job title. This trope is about those rare times where Everyone Calls Him "Barkeep" because "Barkeep" is the guy's actual name. This may happen as a result of Who Names Their Kid "Dude"?. Alternatively, maybe the guy had his name legally changed to "Barkeep" because he likes that name better than his given name.

Milder examples can include a nickname that turns out to actually be the character's name. For a full comedy incarnation of this trope, the given name will be the full job description.

In real life, this is one of the ways family names began, by an original ancestor actually having that profession, with such prominent examples like Keanu Reeves ("reeve" was a title for some government authorities in medieval England) or Michael Schumacher ("Schumacher" being German for "shoemaker"). Once such surnames started to become passed down to descendants whether they had that profession or not, it became more notable when people actually did have the profession they were named after.

This trope would be an example of an aptronym

, when your name happens to truthfully describe something about you.

The trope is closely related to A Dog Named "Dog", when something is named for its species. See also Verber Creature for when a creature is named for something they are notable to do.