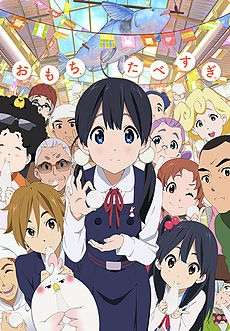 Her name's Tamako. She's in a market. What more do you want?
Advertisement:

Tamako Market (たまこまーけっと) is an original anime TV series produced by Kyoto Animation and directed by Naoko Yamada, with Reiko Yoshida serving as series composer and Yukiko Horiguchi serving as character designer and chief animation director; all three women had previously worked together on K-On!.

The story follows a happy-go-lucky girl named Tamako Kitashirakawa and her daily life in a shopping arcade. Tamako herself is a high school student and the daughter of a mochi maker who conducts his business from home. Their mochi business, called Tamaya, is right in front of a western-themed mochi shop called Rice Cake Oh! Zee, which creates a lot of friction between Tamako's father and the Ooji family. Of course, true to the Romeo and Juliet archetype, the son of the owner of Rice Cake Oh! Zee is Mochizou Ooji, a Childhood Friend of Tamako. As expected, Tamako is Mochizou's love interest.

One day Tamako goes to the local florist and finds a strange bird inside a bouquet of flowers. As she soon learns, the bird can talk, calling itself Dela Mochimazzi and claiming that he is on a quest to find a bride for the prince of a small island nation. The bird follows Tamako back home, whether she or her family likes it or not.

Is currently being streamed in the U.S. by Hulu

. A novel adaptation has also been published.

A movie which acts as a sequel to the TV series, Tamako Love Story, premiered on April 26, 2014. Just as the title suggests, the story focuses more on love than the original show.