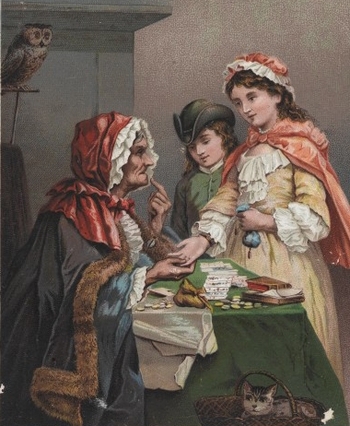 Aunt Wu: Your future is full of struggle and anguish, most of it self-inflicted.
Sokka: But, you didn't read my palms or anything.
Aunt Wu: I don't need to. It's written all over your face.
— Avatar: The Last Airbender, "The Fortuneteller"
Advertisement:

The Fortune Teller is often an old Magical Romani woman, though mechanical ones are not unknown. May reside at the local Creepy Amusement Park, The Freakshow, or Circus of Fear. Expect an Eastern European accent, Tarot Cards, a Crystal Ball, a cup of tea and some sort of prophecy involving the words "I see..." They sometimes use the phrase "Cross my palm with silver" when they wish to be paid. They are very often refered as "Madame X". They have also been known to lead a Spooky Séance.

There are also fortune tellers who have Caribbean or Cajun accents. Their tarot cards and fortunes will be powered by Hollywood Voodoo. East Asian stories have their own variations, which may be based on local religion or magic, and/or on imported Western concepts.

Compare the Phony Psychic and the Astrologer.