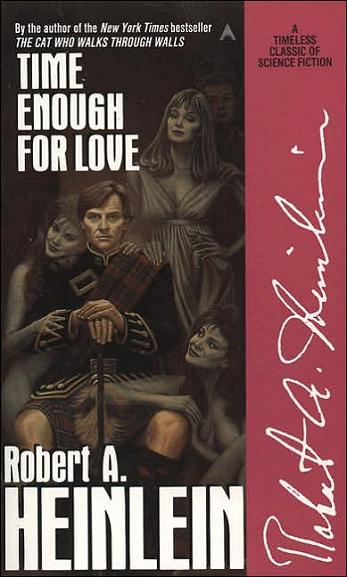 There’s no virtue in being old, it just takes a long time.
"Work is not an end in itself; there must always be time enough for love."
Advertisement:

Time Enough For Love is a Speculative Fiction novel by Robert A. Heinlein, first published in 1973, which fits into his Future History mythology. It is conceptually a sequel to Methuselah's Children and was followed by The Number of the Beast.

In the 43rd century AD, Lazarus Long is the oldest living human being by well over a thousand years, thanks to a remarkable genetic heritage and the technology of human rejuvenation. But even a semi-immortal, ornery coot of a man can grow tired of life, and it's long been established in a galactic society of extraordinarily long-lived humans that the right to end one's life when one chooses is as sacred as anything gets.

However, Ira Weatheral, the chairman of the Howard Foundation, disagrees, believing that Lazarus' unique store of human wisdom is worth any cost to save. Lazarus makes a deal with him: he will recount tales from his life until he's fully rejuvenated. Within that time, Ira has to come up with something new for him to experience. If he cannot, Ira must agree to let Lazarus die peacefully. Thus begins a kind of reverse-Scheherezade Gambit and a Framing Device for an exploration of vast swathes of Heinlein's universe from the point of view of this near-mythological figure.

After Lazarus' rejuvenation, the novel abruptly changes tone and becomes a Time Travel adventure, as this is among the various suggestions that his friends come up with for things that he might do. Given the vastness of human history to choose from, he elects to visit his own childhood family in Kansas City, Missouri. But a slight miscalculation or two might well end the career of this interstellar traveler for good.