Write Back to the Future 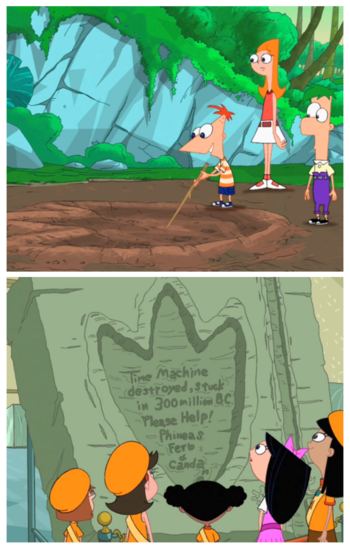 Doc Brown: It's a very interesting story, future boy. But there's just one little thing that doesn't make sense: If the me of the future is now in the past, how could you possibly know about it?
Marty: You sent me a letter.
— Back to the Future Part III
Advertisement:

So, your friend couldn't get through the one-way time portal before it closed, and as you're standing there wondering what to do, this guy from the Post Office comes up and says that he's got this letter, posted 80 years ago, and addressed to you. Turns out your friend spent ten years building a machine to stop the Big Bad, and he sealed it away right beneath where you're standing now. As you read it, you can't help but marvel that the message actually made it through the postal service.

Write Back To The Future is when a time-traveler stuck in the past sends a message along The Slow Path to their compatriots in the future. It may be a way to get them back; it may be the solution to the problem they're looking for; it may just be an assurance that they had a full and rewarding life in whatever century they got stuck in.

Usually, the message shows up right after the relevant time-travel. In especially clever instances, it may appear before said travel.

The likelihood of this actually working depends on the method used to send the message. If you just drop a letter in a drawer, you're betting that nobody's going to move stuff around for the next sixty years, the desk isn't going to get moved, destroyed, or sold off, et cetera. On the other hand, if you put it in a safe deposit box in a major bank or even behind a loose brick in the masonry, it should be there decades later. Another method is to make many copies of the message to ensure that at least one survives (e.g. publishing it as an advertisement); this requires composing a message whose real meaning is only apparent to the intended recipient.

Often, but not always, part of a Stable Time Loop. Inspired by, but not to be confused with what Robert Zemeckis and Bob Gale did.