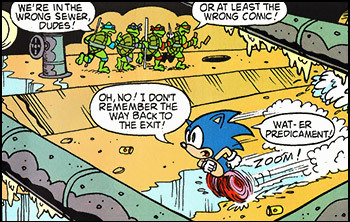 Some people are very lost.
Leela: Who are you people? Haven't I seen you in some copyrighted movie?
Glurmo: [singing] We resemble-but-are-legally-distinct-from the Lollipop Guild, the Lollipop Guild...
— Futurama, "Anthology of Interest II"
Advertisement:

Sometimes fiction leans towards a rather lax interpretation of trademark issues. You may find characters who are not merely an imitation of characters from a popular show, film or comic, but literally are those characters. Somehow.

You can blur their face a bit or simply not name them. Still, this trope is known enough that you can expect any work that featured these frequently will get modified a bit if the adaptation's sponsors are worried about copyright infringement.

On the other hand, if said cameo characters are famous enough, you're liable to get away with a more overt reference.

Often used as part of a Take That!, but it can also be a friendly Shout-Out. If a real person is being imitated, that's No Celebrities Were Harmed. Compare Writing Around Trademarks, Captain Ersatz, and Expy Coexistence, where Expies and the characters that they are based on live in the same world/canon.

Batman is on another network

The announcer says only one hero (Batman) can stop Cave Guy, but he's on another network.

Batman is on another network

The announcer says only one hero (Batman) can stop Cave Guy, but he's on another network.