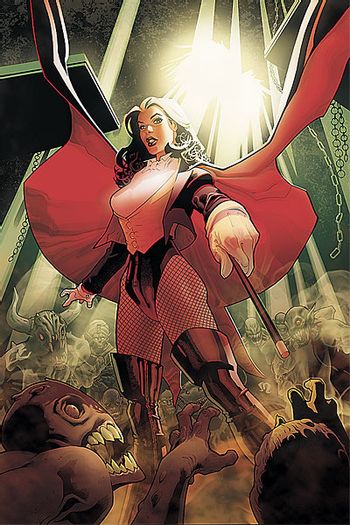 Zatanna Zatara, Mistress of Magic, is a Stage Magician with actual magical powers who also works as a superhero in the DC Universe. She first appeared in Hawkman vol. 1 #4 (October-November, 1964), created by Gardner Fox and Murphy Anderson. She is the daughter of Giovanni "John" Zatara, a Golden Age hero who first appeared in Action Comics #1 in 1938. Yes, that Action Comics #1, though needless to say Zatara never made it quite as big as his anthology co-star. Zatanna eventually joined the prestigious Justice League of America. During the 1990s and 2000s, she was notable for being exempt from the usual kiddy-innocence-preserving barrier between characters appearing in standard DC comics and in the more "adult" Vertigo, making appearances in titles published under both imprints.

Zatanna finally got an ongoing solo series, Zatanna, in May, 2010, written by Paul Dini and drawn by Stephane Roux. Though still an active hero, Zatanna is also performing traditional magic on stages across America, earning her considerable status as a celebrity beyond her fame as a hero. Because she does not possess a Secret Identity or Code Name she has to deal with the intrusion of the evil and supernatural into her day to day life, but her excellence at the mystic arts (She was regarded as the single most powerful member of the 2005 incarnation of the Justice League) means that she is not overly concerned about such events. The series begins when officer Dale Colton, an ordinary human in the San Francisco Police Department, asks for her help in investigating the brutal murders of the ranking members of the city's organized crime families. These murders lead Zatanna to discover that the local mystical criminal organizations have decided it is time to muscle in on more mundane villainy. After she solves this initial crime, and deals with the repercussions, the series follows her as she combats other supernatural threats to herself and others as she tours across the country.

The series was cancelled prior to the relaunch of the DC Universe as the "New 52" in September, 2011, leaving the plot unresolved. After the relaunch Zatanna was brought back in the angsty team comic Justice League Dark, reuniting her with John Constantine.

Paul Dini had previously written the character during her numerous appearances in the DC Animated Universe, with an appearance in Batman: The Animated Series and two appearances in Justice League Unlimited. It was something of a joke amongst the production staff, and also a little bit more true than the average joke, that he has a crush on the character. He eventually married real life stage magician Misty Lee, who is regarded by many as the closest he could possibly come to marrying the actual character. In both that show and Batman: The Brave and the Bold she's voiced by Jennifer Hale. The character also appeared in seasons eight and nine of Smallville, played by Serinda Swan. She had a 2003 Cartoon Monsoon pilot written by Dini with Tara Strong voicing her. She appears in Young Justice as a teenager whose father is still an active hero and Justice League member. Zatanna joins the team of young heroes in the first season, but eventually joins the Justice League in the second season. She also makes a DLC appearance as a playable fighter in Injustice: Gods Among Us, with both of these later appearances being voiced by Lacey Chabert. She would later reprise the role in Justice League Action to voice Zatanna as an adult, while Dayci Brookshire voices young Zatanna. In DC Super Hero Girls, she's once again a teenager, and is voiced by Kari Wahlgren, who she previously voiced in Justice League Heroes.

A Zatanna feature film was confirmed to be in development by WarnerMedia in March 2021. Later that month, Emerald Fennell (Promising Young Woman) was attached to write a screenplay

to be produced by DC Films and J. J. Abrams' Bad Robot Productions.